Philly is getting that 'Big Bling' sculpture installed along Kelly Drive 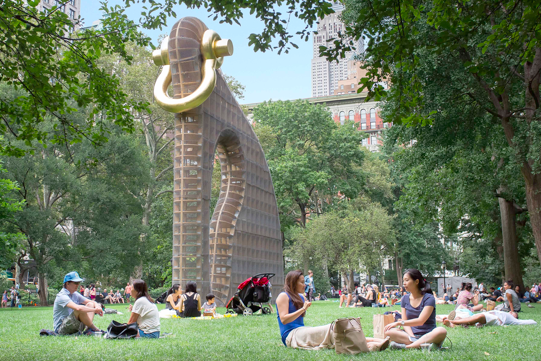 Next time you're passing along Kelly Drive and you happen to catch a glance at Carl Milles’ “Playing Angels” sculpture, don't let your peripheral vision (because you're obviously watching the road) fool you. There's going to be another giant sculpture visible on the riverside in the coming weeks.

"Big Bling" is sort of a challenge to describe. It looks like it could be a person bent in prayer, a harp, an elephant, or a rotated nose with a septum ring, to these eyes.

"I tend not to tell people what they’re looking at when they’re in the presence of my work,” said Puryear, 75, a decorated artist who works out of New York's Hudson Valley region. “I trust people’s eyes. I trust their imagination.”

The multi-tiered wood structure, Puryear's largest outdoor sculpture to date, is wrapped in chain-link fence and anchored with a gold-leafed shackle. Its abstract form is made of laminated timbers and plywood.

“Installing Big Bling within an expanse between Kelly Drive and the Schuylkill River will offer a totally different setting from Madison Square Park,” said aPA executive director and chief curator Penny Balkin Bach. “It will provide an opportunity to see the sculpture in a very different context along the riverfront with the Pennsylvania Railroad, Connecting Railway Bridge in the background."

A free public celebration welcoming Big Bling to Philadelphia will be held Thursday, June 8, 2017 from 4:30 p.m. to 7 p.m. You can register to attend the event here.