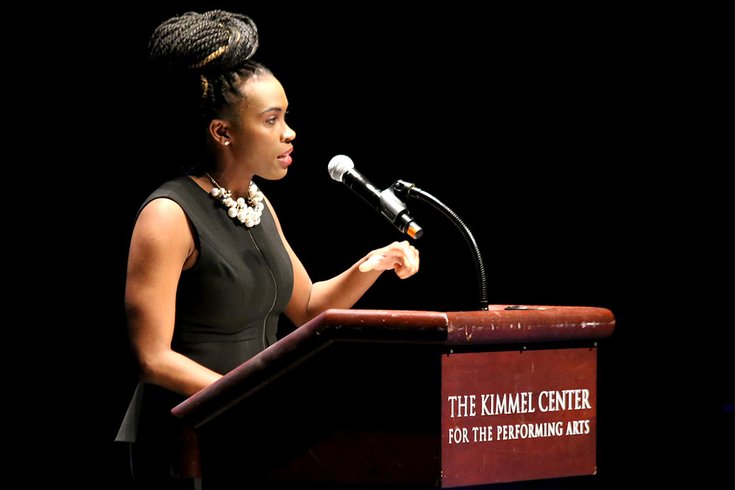 Amber Hikes, director of Philadelphia's Office of LGBT Affairs, speaks to the audience at the city's first LGBTQ+ State of the Union event on Tuesday night in Center City.

In the first-ever LGBTQ+ State of the Union at the Kimmel Center on Tuesday night, Philadelphia’s leaders and community members filled the Perelman Theatre to hear from some of the most influential LGBTQ organizations in the region.

Kenney, in what seemed like a rare off-the-cuff moment, compared today’s tumultuous political environment to that of 1968, suggesting that despite the challenges being faced now, particularly by the LGBTQ community, that “one day we’ll be in the post-Trump environment.”

The city’s efforts to push back against federal mandates can be seen in a few key pieces of legislation, like a bill banning conversion therapy, as well as a push to amend gender signifiers like “husband” and “wife” to “spouse” on all marital documents.

Amber Hikes, executive director of the city's Office of LGBT Affairs and host of the event, announced for the first time publicly that many of Philly’s most famous landmarks like the Ben Franklin Bridge, PECO building, Children’s Hospital of Philadelphia and Boathouse Row will be lit up in the colors of the rainbow just in time for June’s annual Gay Pride Month.

Over the last decade, we have witnessed great strides made to ensure the rights of all people. We must make sure that work doesn’t go unknown. Thank you, @PhillyMayor. #LGBTQSOTU pic.twitter.com/AyD4FVv6h0

Also for the first time this year, there will be daily free, family-friendly events in conjunction with Gay Pride, including workshops, film screenings and a night market in addition to the Pride Parade and Festival at Penn’s Landing on June 10.

What happens after Pride Month, said Hikes, is multifaceted, with efforts being directed to ensure that Gay/Straight Alliances (GSAs) are created in all Philly public schools with student access to LGBTQ liaisons at these schools. Hikes will also be “mandating,” she said, “LGBTQ-inclusive curriculum.”

Given the scandals that rocked the Mazzoni Center in the past two years, all eyes were on Lydia Gonzales Sciarrino, the new executive director of the LGBTQ health organization. For many in the community, the SOTU was the first time she spoke to a predominately LGBTQ audience. And while Sciarrino did not discuss the past events that led to the controversial termination of the former executive director and medical director, she did tout Mazzoni’s newest efforts to diversify staff.

The center is also launching its first LGBTQ-exclusive outpatient program, said Sciarrino. While it’s not the first in the city, it is the first for the center’s new headquarters on Bainbridge Street.

'WE ARE NOT PUTTING UP WITH ICE ARRESTING OUR PEOPLE'

The William Way LGBT Community Center unveiled plans to renovate the aging center on Spruce Street. A little-known initiative, said Executive Director Christopher Bartlett, has been making free space at the center available to people of color and trans people who wish to host events.

Another big effort for the center has been flying slightly under the public radar – its support of LGBTQ immigrants. As the White House amps up efforts to deport many refugees, Philadelphia is flexing its muscles as a sanctuary city.

“We are not putting up with ICE arresting our people,” said Bartlett. The center has been working with several nonprofits to house and assist immigrants who have fled countries because of persecution or who are, in many cases, married to a same-sex partner in the United States.

Similarly, GALAEI, a queer LatinX social justice group, is also expanding outreach efforts to non-English speaking LGBTQs despite losing several key grants. The group, which has faced a severe financial shortfall this year, is appealing to the community to fund its Trans Equity Project, which recently received $25,000 from the Philadelphia Foundation.

“The budget was cut in half,” said GALAEI’s Interim Executive Director Francisco Cortez. As such, two full-time positions were both cut to part-time as the organization struggles to secure enough funding to continue the program.

Dr. Carrie Jacobs, the executive director of the Attic Youth Center, reminded the audience that like immigrants and people of color, LGBTQ youth also face major obstacles in the current political atmosphere. And unlike Philadelphia, the state of Pennsylvania does not offer any anti-bullying protections for this group, considered the most at-risk segment of young people; they face higher rates of abuse and suicide than their straight, white CIS-gender peers.

And while the LGBTQ community at large has made “tremendous strides,” said Jacobs, LGBTQ youth of color and trans youth still have many more obstacles to overcome.

'YES, WE HAVE STRUGGLED'

With racism still on the minds of many in the community, especially in light of ongoing accusations of discrimination in the Gayborhood, much of the State of the Union focused on the need for inclusion.

A few participating organizations, like Philly Black Pride and COLOURS, reminded the audience that they had both been created specifically to address what many people of color felt was an undercurrent of discrimination that has persisted in Philly’s LGBTQ community for many decades.

COLOURS Executive Director Damon Humes said the “experiences that have divided the community” and “ravaged and separated us” have actually made the group’s mission even stronger.

Both groups are organizing new events and honoring community members who have made positive contributions to LGBTQ black culture in time for Gay Pride Month. 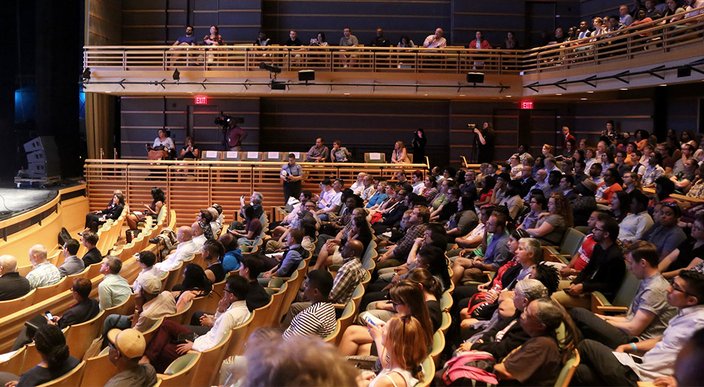 The city's first-ever LGBTQ+ State of the Union drew a large crowd to the Perelman Theater at the Kimmel Center.

'WE LOOK AND FEEL SO MUCH MORE LIKE THE CITY NOW'

The good news for many in attendance on Tuesday night was learning about at least a few new strides being made with the help of organizations like the Independent Business Alliance (IBA), Philly’s own LGBTQ chamber of commerce.

Touting what he calls “business equality,” IBA Executive Director Zachary Wilcha said efforts have been directed to not only bring “LGBTQ businesses into the commerce stream,” but to diversify even further to include people of color, women and transgender people.

With LGBTQ business representing an estimated $1.7 trillion within the U.S. economy, the equivalent of the ninth-largest country in the world (larger than Russia, added Wilcha), the potential for growth is being felt locally.

But a big obstacle for the IBA, as with many other LGBTQ organizations, has been in diversifying its membership and board. “Admitting the problem is the first step in solving it,” said Wilcha. “We feel and look so much more like the City of Philadelphia now.”

Going further, the IBA is getting ready to launch a first-of-its-kind trans work program that’s designed to help transgender people find employment. And changes to the Women in Business initiative will make it ultimately more inclusive to transgender and non-binary people.

The IBA is also working with the William Way and Office of LGBTQ Affairs to create what’s being dubbed “a pipeline of leadership” to ensure that more people of diverse backgrounds have the chance to participate in leadership roles in many of the organizations that participated in the SOTU event.

Hikes ended the evening by encouraging people in the community to meet with members of the participating organizations stationed throughout the Kimmel Center. The groups spent more than an hour meeting people and fielding questions about leadership and inclusion. For some people, it may be the first time they had any interaction with the leaders of these organizations. For others, it was a reunion of sorts.

Hikes seemed hopeful that by facilitating these discussions, Philly’s LGBTQ community can and will be on the forefront of making real change. She said no other LGBTQ community is making the quantifiable efforts being made in Philadelphia at this moment.

“What good is policy,” said Hikes, “if people don’t feel connected to the work we’re doing?”