The new storefront will feature pints, cups and cones 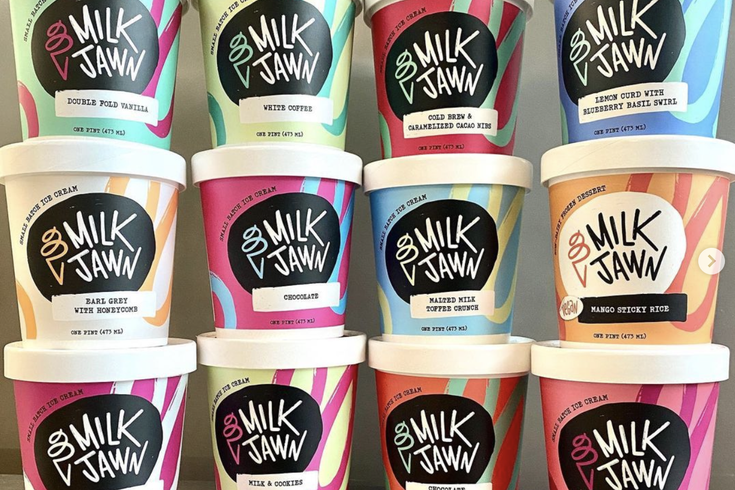 Nearly 10 years after Milk Jawn was born as a small-batch ice cream business in Philadelphia, the company is ready to make a leap forward with its first storefront and a new production facility in East Passyunk.

The brand, founded by Amy Wilson and co-owners Ryan Miller and Cathryn Sanderson, soon will open a 500-square-foot shop at 1439 E. Passyunk Ave., next to Essen Bakery. A 2,600-square-foot production facility will be located at 1303 East Passyunk Ave., a move from its current space inside MaKen Studios North in Kensington.

Wilson created Milk Jawn in her kitchen in 2012 as a hobby, but it grew into a business over the years. She ramped up operations with a formal launch during the pandemic, offering a series of pop-ups and delivery service. Milk Jawn's products also have been available at several stores in the area, including Stone's Beer & Beverage Market, Riverwards Produce and Carlino's Market in Ardmore.

"We started as a very small business which people only knew about because of word-of-mouth and Instagram, but before we knew it, word spread and Philadelphia had welcomed us in with open arms," Wilson said. "Once people found out about us, we would sell out of product immediately, and we knew we had something big."

The storefront in East Passyunk is expected to open next spring.

"After two-plus years since launching, we are thrilled to finally bring our ice cream to a storefront where customers can come in and enjoy our ice cream in more ways than just grabbing a pint to bring home," Wilson said. "This is incredibly exciting for us.”