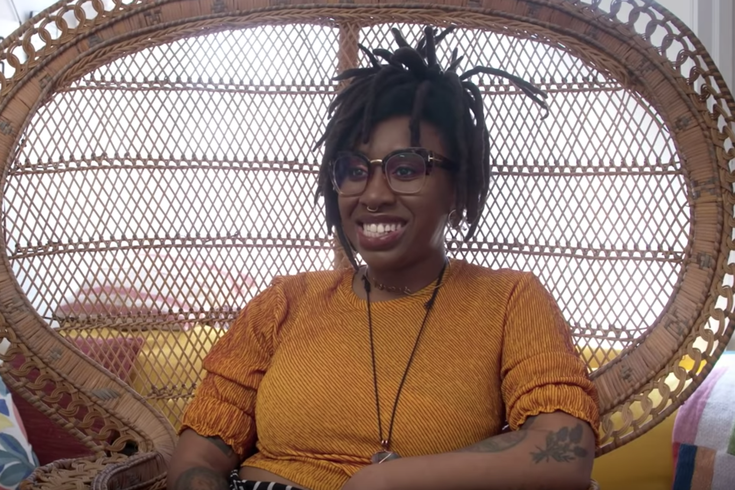 Loveis Wise, a 24-year-old illustrator who graduated from University of the Arts and is now based in Philadelphia, was featured in Adobe's Create Magazine.

Loveis Wise, a 24-year-old Philly-based illustrator who graduated from University of the Arts and has already illustrated two different magazine covers for the New Yorker, is a featured artist in this month in Adobe's Create Magazine.

Create Magazine is a weekly digital magazine from the company behind computer and phone applications like Photoshop, Illustrator, and Lightroom, that features "innovative artists and shine a spotlight on creative work" each week.

Wise recently teamed up with Mural Arts and the Navy Yard for a series of murals, unveiled earlier this month, which will be on display throughout the summer. She also announced in early April that she'll be illustrating a picture book from National Book Award finalist Ibi Zoboi about Kwanzaa and the African-American experience, out in 2021 from HarperCollins.

Now, her work has caught the eye of the creators at one of the biggest multimedia technology companies in the country:

At 24 years old, Illustrator and artist @LoveisWise_ is creating art featured on the cover of the New Yorker. @AdobeCreate caught up with her to learn more about her passion, work, design, and her thoughts to the future of illustration. https://t.co/gd4s4nRB9B pic.twitter.com/gWaddCyDaU

In the magazine story, Wise, who hails from Washington, D.C., talks about her immediate connection with Philadelphia:

"She took community college classes in photography, drawing, and painting; built up a portfolio; and then realized it was time to go to art school. On a visit to Philadelphia with a friend, she fell in love with the city. She thought, “This is so cool; there’s art everywhere.” She discovered Philadelphia’s University of the Arts and decided to enroll."

Wise also talks about her affinity for Philly in Adobe's accompanying video feature:

"Philly is, like, a small but large city. It has the hustle and bustle of New York, but it's its own lane. Everyone is just very chill, very kind. It's filled with art, and I think that's the thread that pulls everyone together."

You can watch the full feature below:

If Wise's profile continues to rise, and it seems like it's headed that way, she'll probably have her own permanent Mural Arts mural in no time.