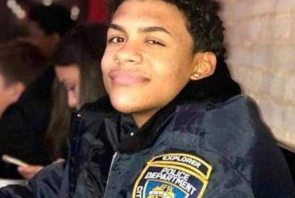 Lisandro "Junior" Guzman-Feliz, 15, was fatally stabbed by Trinitarios gang members at a Bronx bodega on June 20, 2018. The teenager had aspired to become detective with the NYPD.

Hundreds of people attended Wednesday's funeral for 15-year-old Lesandro Guzman-Feliz, the innocent teenager who was tragically killed last week by a group of gang members who mistook his identity while at a bodega in the Bronx.

At an emotional ceremony, mourners shouted "Justice for Junior!" in honor of the teen's nickname.

Guzman-Felis was viciously killed in a machete attack on June 20 after members of the Trinitarios gang dragged him out of the bodega on East 183rd Street in the New York City borough. Video taken from before and after the incident shows the owner of the bodega refusing to offer refuge or help to Guzman-Feliz, whose blood covered the floor and countertop of the store.

The teen was limping to a nearby hospital when he collapsed on the sidewalk and died of his injuries.

Authorities believe Guzman-Feliz was mistaken by gang members for another teen who had appeared in a boastful social media video with the female cousin of one of the Trinitarios. The stabbing also is believed to be linked to another attack two days earlier on the Bronx River Parkway.

Guzman-Feliz was a member of the NYPD Explorer Program and had dreamed of becoming a detective when he grew up.

In honor of Junior's dream, Jonny Castro, a Philadelphia police forensic composite artist, took to Facebook to share an image of Guzman-Feliz that he put together as a tribute.

"If he wasn't taken in such a senseless manner, I have no doubt in my mind that Junior would've made an outstanding Police Officer," Castro wrote. "He had blue coursing through veins at an early age, and that makes him family to me and every other officer that wears the badge. I truly hope this painting reflects the kind of person he was."

Eight suspects have been arrested in the stabbing of Guzman-Feliz amid an ongoing investigation.

Supporters have donated more than $280,000 to a GoFundMe campaign created to help Junior's family.