A quick guide to this weekend's Pride Parade and Festival

The theme for 2019 honors the 50th anniversary of the Stonewall riots, which started the modern LGBTQ+ rights movement 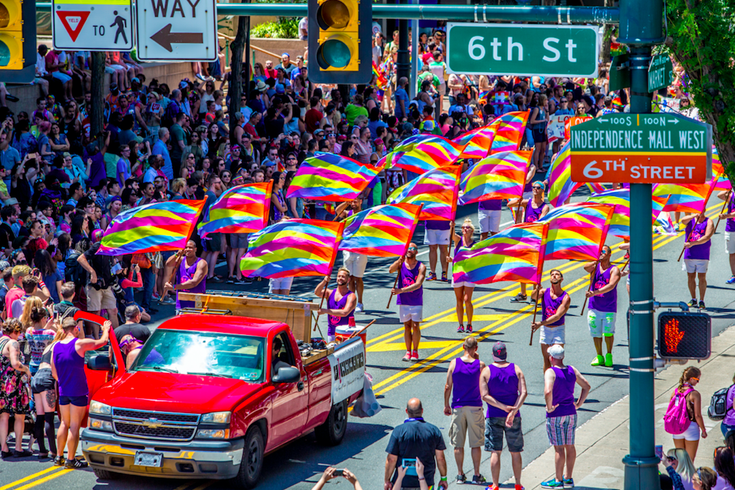 The Pride Parade in Philadelphia travels from the Gayborhood to the judging area at 6th and Market streets to Penn's Landing.

The 31st Pride Parade and Festival in Philadelphia will take place Sunday, June 9. It will start at 11 a.m. this year and, for the first time, the annual event celebrating the LGBTQ+ community will be televised.

"Stonewall 50," commemorating the 50th anniversary of the event credited with starting the modern LGBTQ+ rights movement, is the theme for this year's parade.

RELATED: Jet Wine Bar's rainbow flights are back to celebrate Pride | Break out the rainbow running gear for the Philly Pride Run in June

The parade will start at 13th and Locust streets, and make its way to the judging area at Sixth and Market streets, where a panel will vote on categories like Best Float, Best Theme, Best Public Statement and Gayest in the Parade.

Around 1 p.m. the parade will reach the Great Plaza at Penn's Landing, where the festival is held. There will be live music, celebrity guests, food, drink, free health screenings and tons of community groups and vendors.

Watching the parade along the 1.5-mile route through Center City and Old City is free, but admission to the festival is $15. The cover charge helps fund the event, pay entertainers, cover site rental and provide money for Philadelphia Outfest, the largest National Coming Out Day event, in October.

Wristbands can be purchased at the festival entrance, Second and Market streets during the parade, or for a reduced rate at the Pride kick-off block party on Friday, June 7. The party will be held at 12th and Locust Streets, from 6 to 10 p.m.

Organizers have stated that this will be the largest Pride parade and festival in Philadelphia ever.

Anyone attending the festival with backpacks be prepared for longer lines entering the Great Plaza. Bags will be checked before entry.