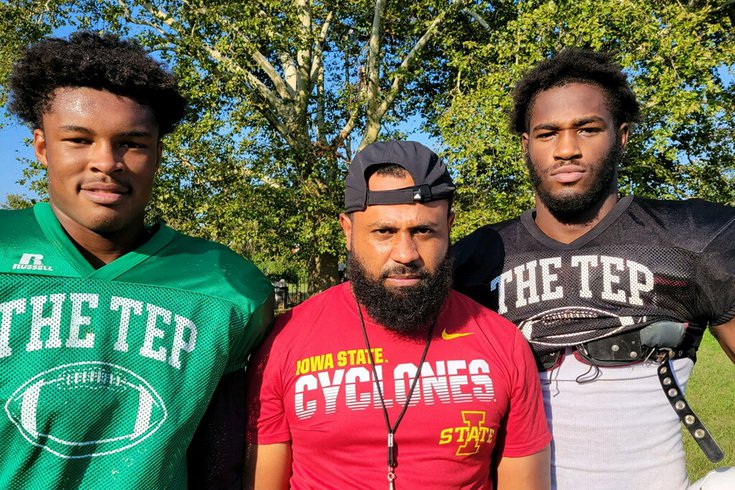 Imhotep Charter is one of the teams to beat in Eastern PA.

Those that follow area high school football are well aware of Imhotep Charter. Regrettably, not many others are besides that ardent, small group.

It’s a gathering that should grow this season and in the coming years, with national-level defensive ends, 6-foot-5, 230-pound Enai White, considered the nation’s No. 1 edge rusher who is considering Alabama, Georgia, Ohio State and Texas A&M, and Penn State-bound Keon Wylie emerging possibly one day as future NFL draft choices.

But let’s take it a step at a time, starting with the Panthers biggest test to date this young season against Catholic League powerhouse La Salle this Saturday at 1 p.m. at Springfield (Montco).

Ranked No. 2 in the area by PhillyVoice, Imhotep (2-0) and La Salle (2-0), which is ranked No. 3, both arrive with major firepower on each side. La Salle will try and counter a loaded Imhotep defense with Rutgers-bound power back Sam Brown and try to curtail the Panthers’ speed with Penn State-bound 6-foot-4, 235-pound senior linebacker Abdul Carter.

Imhotep, a small Class 5A school, enters this game with victories over Pittsburgh Central Catholic (12-6) and Maryland giant DeMatha Catholic (14-10)—the same DeMatha that beat South Jersey’s No. 1 Holy Spirit, 28-7, in its season opener.

The Panthers may have the best defense in Philadelphia — possibly the best 5A defense in the state.

“We expected to win this year,” Panthers’ coach Devon Johnson said. “We have a talented team and we have a good group of seniors that are returning—and it’s a hungry group of seniors that were sophomores on that 8-5 team we had a few years ago. We expected to play Pittsburgh Central Catholic hard and the same with DeMatha Catholic. We believed in ourselves when a lot of people didn’t think we could get the job done.

“Offensively, we’re a work in progress and we’re finding our identity. We have a new quarterback and a new corps of receivers. Our best offense is ahead of us. We have a sophomore at quarterback, Mikal Davis, who is maturing. Senior Will Robinson and sophomore Tre McLeod (the younger brother of West Virginia safety Saint McLeod) are our tailbacks who get better with each game.

“La Salle is a very well-coached, excellent team. This is a big challenge for us. We want to establish our dominance in the city and the state. We pointed at these three games to do it. We beat Pittsburgh Central Catholic. We beat a great team like DeMatha, and our seniors, that’s Enai and Keon, lost to La Salle, when they were sophomores.

“We know this will be a battle. We’re taking it one game at a time, and right now, La Salle is the biggest game in program history. Our kids are focused and they’re up for the challenge.”

Please check out the Pre-Snap Look podcast, which features the best in high school football from across the region, and EasternPAFootball.com, the only thing better is being at the game.