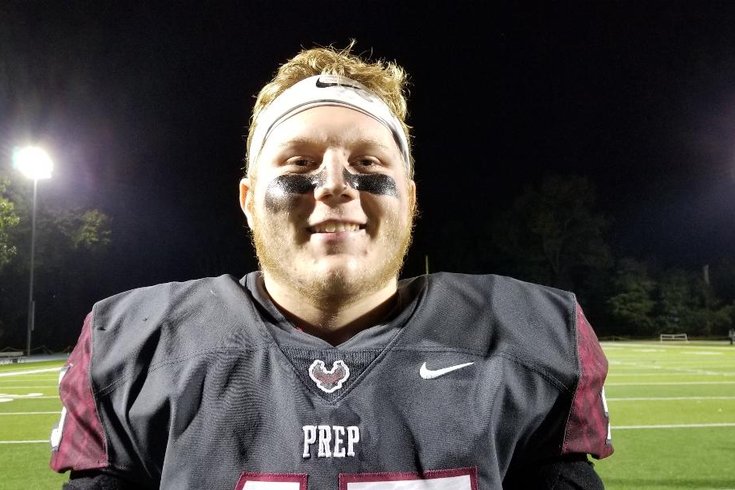 In fact, Leneghan, a 6-foot-2, 255-pound two-year starter, finds himself in some rare company in the country.

There’s no way to empirically prove it, but Leneghan may be — the operative word being may — the only defensive lineman in the nation who leads his team in interceptions at any level of football, grade school, high school, college or pro. If anything, he’s certainly among a very exclusive group.

In the Hawks’ season opener against Marietta (GA), Leneghan intercepted a screen pass and almost took it all of the way then.

He’s smart (a 1,260 SAT score and carries a 3.5 GPA at Prep, no easy task, and is being recruited by Ivy League schools), he’s surprising very nimble for someone his size, with fast feet, and comes from a strong football pedigree (his father, Tony, was a defensive line coach at Father Judge for 20 years).

He also has a penchant for intercepting passes. He had one last year, giving him three over the last two seasons — which may be another national benchmark, simply because of how rare it is that a defensive lineman intercepts a pass.

Leneghan causes a lot of problems for opposing offensive linemen. He’s a converted fullback, who moved to defensive line last year. Previous Hawks’ coach Gabe Infante made Leneghan the captain of the defensive line, making all of the line calls and adjustments.

“I see myself as a defensive lineman in college,” said Leneghan, who is getting attention from Penn and Dartmouth. “It is kind of funny that I lead the team in interceptions. Against Wood, I wanted to score. I had to score. I got caught against Marietta earlier this year, and I had one last year (against St. Peter’s).

“We’re caught that when we see screen, to turn and run to the back. I felt screen and ran right to the running back. Against Wood, I dropped back and the quarterback threw it right to me and I just took off. This time, I didn’t get caught.”

As a team leader of the area’s most dominant team, Leneghan has an important role off the field: Keeping the Hawks engaged and fighting complacency. It’s easy to seep in and spread to a group of 15, 16 and 17-year-olds who are winning games by 35 points.

“Keeping focus is easy, we go against the best offense in the country every day in practice, and competition is the biggest thing, and we think our practices are way harder than the games,” Leneghan said. “We keep the goals simple: Winning the state championship again.”

Leneghan finds himself in a unique spot tonight, when the Hawks play Judge, where Leneghan was the water boy for six years while his dad was an assistant coach there.

Leneghan has a great knack for finding the ball. He causes problems each week for Prep at practice, because he’s constantly disrupting the Hawks screen plays.

“Anthony is a great kid, he has a great personality,” Hawks’ coach Tim Roken said. “Anthony has played for us since his freshman year, and I think it was Week 2, he scored a touchdown pass against Don Bosco.

“Every day, Anthony comes to work. He has a blue-collar work ethic who’s become a phenomenal leader for our younger guys. He does lead our team in interceptions. I got on him a little after the Marietta game. I was teasing him that he had to score when he gets an interception.

“So, last week in practice, he intercepted a pass and was running down the sideline. We blew the whistle, but he did come back and say, ‘Coach, I’m scoring if I get one this time.’ He did. He’s very coachable, and he’s a very good, smart athlete. He’s sneaky, because you wouldn’t figure someone like him would be that fast on his feet at that size. It’s why he’s been a fullback, tight end and defensive lineman in the time he’s been here.” 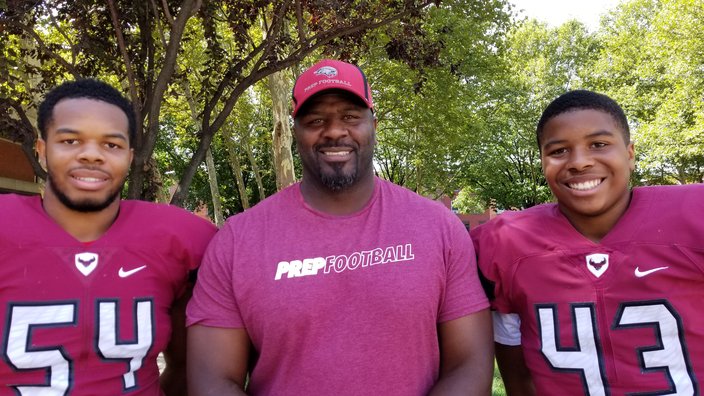 Another Trotter is causing havoc at Prep

St. Joe’s Prep freshman linebacker Josiah Trotter is filling the void and starting at linebacker while his older brother, Jeremiah Trotter Jr., a junior, recovers from suffering a broken right arm in the Hawks victory over Roman Catholic two weeks ago. Jeremiah Jr., a Clemson commit, was playing at an elite level when the break came, probably the best high school linebacker in the country. Josiah and Jeremiah Jr., the sons of former Eagles’ great Jeremiah Trotter, will be starting side-by-side next year.

Coatesville has been winning without star quarterback Ricky Ortega, a Villanova commit, consistently in the lineup as he recovers from an injury, while Downingtown West remains one of the most potent offenses in the area, averaging 46.25 points a game. West throttled rival Downingtown East, 63-35, two weeks ago in a game in which the Whippets turned the ball over four times.

“I like the way we’re playing defense and special teams, and we’re getting our running game going. It’s improving and that’s what most impresses about how we’re attacking teams. I’m excited how our kids have grown and we’re improving with each game. Ricky hasn’t played a full game since Week 1. We’re trying to get him healthy for the last stretch. We’ll see if he’s able to play Friday night.”

“Downingtown West has a lot of experience coming back and their deep run in the playoffs last year gave them a lot of confidence,” Matt Ortega said. “They’re playing at a real high level and they have very good players.