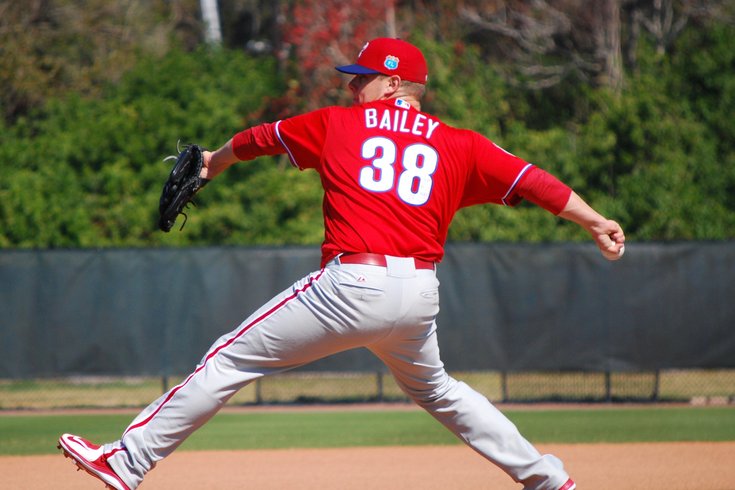 Haddon Heights, N.J. native Andrew Bailey was called up from Triple-A to join the Phillies bullpen on Wednesday.

Fourteen years ago, Andrew Bailey was a teenager wrapping up high school at Paul VI in Haddonfield N.J. The Phillies, meanwhile, were off to their usual slow start: they were 8-18 after 26 games to begin the 2002 season.

But they were Bailey’s team, so he rooted for them anyway. He'd still go to the Vet to watch games with his friends.

On Wednesday afternoon, Bailey’s baseball career came full circle when he was promoted from Triple-A Lehigh Valley to join the Phillies bullpen.

The 31-year-old Bailey is a former American League Rookie of the Year and two-time All-Star with a World Series ring. A shoulder injury stunted his career in the last half decade – prior to least September with the Yankees, Bailey hadn’t appeared in a major league game since 2013.

On Wednesday, he was back in the big leagues and hoping to stick around for good in a uniform he rooted for growing up in Haddon Heights.

“I was very fortunate to wear a lot of prestigious big league uniforms with Oakland and the Red Sox and Yankees,” Bailey said before the Phillies took batting practice on Wednesday. “But, for me, this is the team I grew in love with the game with. So it’s definitely special to me. The Phillies do have a rich history of winning and hopefully we can bring that back for sure.”

Bailey’s parents were both headed to Citizens Bank Park for Wednesday’s game against the New York Mets. His wife and kids were back in Connecticut, where he makes an offseason home, and he wasn’t sure just how many other ticket requests he’d have to accommodate from his friends in the South Jersey community.

“I haven’t even checked my phone yet so I don’t know if anybody knows yet,” Bailey said of the news that was only announced about an hour after batting practice began.

The Phillies designated left-handed reliever James Russell to open a roster spot for Bailey. The 6-3 right-hander and former closer will likely see action somewhere between the sixth ad eighth innings out of the Phils’ makeshift pen, where roles are still being defined 2 1/2 weeks into the season.

After an odd start to the season with the IronPigs – the team had their opening series postponed due to inclement weather – Bailey was able to get his arm going and produce positive results, too, in the last 10 days. Bailey struck out 10 batters, walked just one and allowed on earned run on four hits in five innings with the ‘Pigs.

After failing to land a spot on the big league roster out of spring training, Bailey said his arm has felt a lot stronger since getting a quick tune-up in the International League.

“I do think going to Triple-A helped me out a little bit in terms of being able to continue to gain strength and momentum going into spring training,” Bailey said. “I feel ready to go, ready to rock. And I feel significantly better than in spring training. I think a lot of guys would say that right now. We just had to tune up some things down there and it wasn’t very long. I’m excited to be back for sure. “

Pete Mackanin has exhausted nearly every option in trying to get his offense going. It hasn’t worked: the Phillies entered Wednesday night with a National League-worst 37 runs scored and a major league-worst 2.47 runs per game.

They haven’t scored more than three runs in a game since April 10.

In his latest effort to get the bats in motion, Mackanin moved Odubel Herrera (tied for the major league lead with 14 walks) to the leadoff spot in his lineup and has the pitcher (Jeremy Hellickson) batting eighth.

“You know, it’s the first time I’ve ever done that,” Mackanin said of batting the pitcher eighth. “I never really had anybody convince me why that was a good idea and then I was looking at the lineup today and I had (Peter) Bourjos hitting eighth. And I thought, ‘You know what? It just looks better with him hitting ninth with Herrera behind him.’ So that way, whoever has been bugging me to leadoff Herrera has that and the fact that if Bourjos gets on, he has guys to drive in. So I killed two birds with one stone.”

Mackanin also said batting the pitcher eighth would not be a regular thing, though.