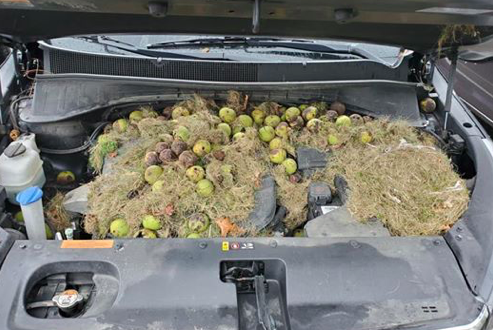 A Pittsburgh couple took to Facebook to share a photo of the nest a squirrel made under the hood of one of their cars. About 200 walnuts and grass had to be removed from the vehicle.

As Pennsylvania battles the scourge of the spotted lanternfly, there could be another menace working under the radar — or under the hood of your car.

A Pittsburgh man took to Facebook this week to share an astonishing photo of his wife's vehicle.

Chris Persic said his wife, Holly, called him from a local library to let him know that her car smelled like it was burning and making odd sounds. He told her to take a look under the hood, and this is what she found.

Persic, who was having car troubles of his own, rented a vehicle and rushed over to the library to help his wife. He said cleaned out grass and as many as 200 walnuts from under the car's hood.

Squirrels are often known to squeeze their way under of the hoods of cars and chew through engine wires. They also nest under hoods if they sense it's a safe place to stow their goods.

Car owners are advised to take preventive measures against squirrels, such as spraying bitter-tasting deterrents under the hood.

"Long story short, if you park outside, do yourself a favor and check under the hood every once in awhile," Persic said. "My truck may have had a squirrel chew through/pull out a fuel injector hose, and Holly’s looked like they were storing up for the next 3 winters. Was absolutely nuts...no pun intended."