Both are located in the city's Fishtown neighborhood; Joe Beddia is no stranger to the magazine's praise 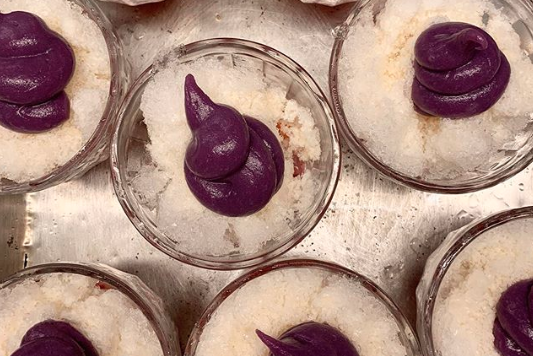 Fishtown restaurants Sarvida and Pizzeria Beddia were both named on Bon Appetit's best new restaurants list of 2019. Pictured is the Halo-Halo dessert from Sarvida, hailed as "perfection" from the magazine.

For food magazine enthusiasts, you'll know that BA named the latter's owner, Joe Beddia, an actual "pizza saint" and notably crowned his pizza the "best pizza in America" back in 2015  — when he was still only making 40 pies a day.

Now, the expanded, modern pizzeria and barroom has been open for almost six months 1313 N. Lee St. in Fishtown. And the magazine is still giving Joe pizza canonization. Under the nomination, Bon Appétit just writes this: "Pizza saint Joe Beddia’s expanded digs live up to the hype."

With less fanfare (but not without some of its own hype), Sarvida, at 300 E. Girard Ave., got the city's second hat tip. It's a Filipino BYOB — Philly Mag named it best new BYOB this year — with sophisticated takes on traditional dishes from East Passyunk's Perla chef and owner Lou Boquila.

"Filipino favorites served family-style in a setting that feels like home," Bon Appétit wrote in its nomination.

The magazine discovered Sarvida, and its signature dessert Halo-Halo, this summer. "The Halo-Halo at Philadelphia's Sarvida Is 5 Layers of Perfection," the magazine wrote in July. A layer-by-layer description of the traditional shaved ice makes us want to be summertime sweaty to enjoy the harmony of this sweet, creamy, gummy, crunchy, and refreshing dessert.