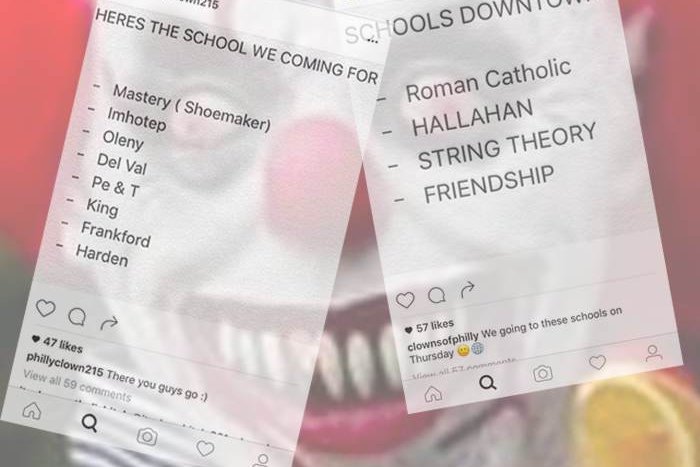 Authorities investigating clown threats made on Instagram against students in a South Jersey community announced Monday that two teenagers have been charged in the apparent online hoax, which targeted Philadelphia on Saturday in a likely separate incident.

"The dialogue continued into Monday when a suspect was identified after a thorough investigation," police said in a release. "Detectives conducted an interview of a female juvenile suspect who confessed to creating the online threats targeting Washington Township students. Based on the investigation and confession, the female was charged with one count of cyber harassment, which is a fourth-degree crime."

A second suspect who was not immediately identified by police is reportedly a 14-year-old boy, according to NBC10. Due to the age of the suspects, authorities would not release further information about the suspects. It remains unclear whether the two of them knew each other or if additional participants in the threats remain at large.

Earlier on Monday, an investigation by Philadelphia police, the School District of Philadelphia's Office of School Safety and federal law enforcement officials utilized tips from citizens to identify a 13-year-old girl who attends a local school as a participant.

The student was not publicly identified by officials.

"This juvenile indicated that this 'prank only' was committed with a friend at her school and she never had any intent to harm anyone," officials said in a statement.

Law enforcement officials say they will continue working to make sure schools and communities are safe.

The case has been sent to the District Attorney’s Office for review, authorities said.