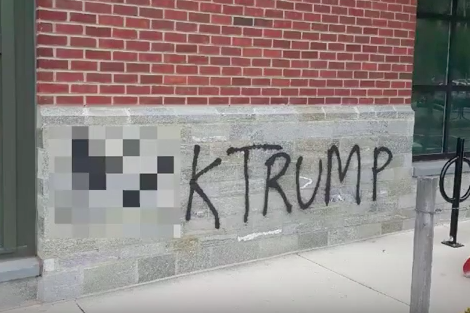 Two suspects are wanted by Philadelphia police for spraying an anti-Trump message on the facade of Chestnut Hill's Fresh Market, located at 8200 Germantown Ave.

According to authorities, the incident occurred just after midnight Friday at the Fresh Market located at 8200 Germantown Ave.

In the footage released by police, two suspects, one carrying a spray-paint can and the other holding a glass of wine, can be seen approaching the business.  From a distance, the video depicts the first suspect spraying the message on the building's front wall. The second suspect then appears to take a photo or video of the graffiti, which reads "F--- Trump."

The incident is one of several acts of political vandalism that have occurred in Philadelphia since the Nov. 8 presidential election. Most of them have been clustered in South Philadelphia and have appeared to involve messages supportive of Trump or the extreme wing of his constituency.

Police described the first suspect as a white male between the ages of 20 and 30, about 6 feet tall with a medium build. He was last seen wearing a blue hooded jacket, gray pants and black shoes. The second suspect is described as a white male, 30-40 years old, with a thin build and reddish hair. He was last seen wearing a blue blazer, tan pants, blue scarf and black shoes, police said.

Damage to the Fresh Market building is estimated to be between $3,000 and $10,000 due to the composition of the stone facade damaged by the graffiti, investigators said.

Anyone with information is asked to contact the Northwest Detective Division at 215-686-3353.