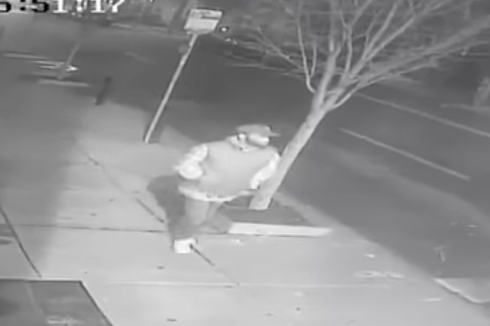 Philadelphia police say this man acted as an accomplice during a sexual assault and robbery that took place around 5:30 p.m. on Sunday in Center City.

Philadelphia police are searching for two men in connection with a sexual assault and robbery in Center City on Sunday.

Surveillance video released by police Tuesday shows a man and a woman walking in opposite directions on the 1300 block of Lombard Street at about 5:30 a.m. The man is then seen grabbing and strangling the woman and pulling her onto the 400 block of South Watts Street, where police said he immediately began to punch her in the face and head.

The man then allegedly sexually assaulted the woman before stealing her backpack, which contained several personal items, police said.

A second suspect, who is shown in surveillance footage, acted as an accomplice, police said. The video appears to show the second man patrolling the area during the alleged assault and robbery.

The video can be seen below.

Capt. Sekou Kinebrew was expected to provide more information on the case at 4 p.m. Tuesday.