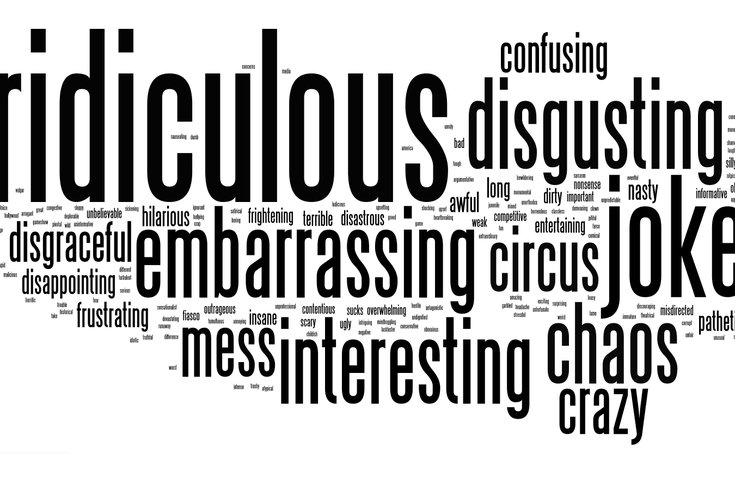 This word bubble shows the most popular descriptors of the 2016 presidential race so far, according to a poll of Pennsylvania voters from the Mercyhurst Center for Applied Politics.

"Ridiculous" is the best word Pennsylvanians have to describe the 2016 presidential race so far, a new poll found.

The March poll from The Mercyhurst Center for Applied Politics in Erie concluded that "Pennsylvania voters appear to be unhappy with the presidential campaign in general."

It surveyed 421 registered voters across the state, giving promising results for Ohio Governor John Kasich and Florida Senator Marco Rubio if they were to become the GOP nominee.

The two defeated former Secretary of State Hillary Clinton and Vermont Senator Bernie Sanders in head-to-head matchups among those surveyed.

Rubio beats Sanders by 5 points and Sanders by 8. Kasich wins by a whopping 13-point margin over Clinton but only by 4 over Sanders

Those findings are likely consistent with the reasoning of the Republican Party establishment in their efforts to stop Trump — the front-runner — from winning their party's nomination over fears he can't win the general election.

Pennsylvania, often referred to as a swing state, hasn't gone red since 1988.

"The fact that we have two Republican candidates leading the two potential Democratic nominees is worth noting," said Dr. Joseph Morris, director of the poll.

"If Republicans hope to win Pennsylvania in November, they would do well to give Kasich and Rubio another look."

Although Clinton's margins of victory and defeat are worse than Sanders' against the GOP candidates, she is, by far, the candidate respondents think "would make the best president of the United States," with 25 percent choosing her.

But candidate preference among state voters is chosen with a bad taste in their mouths about the campaign as a whole.

The aforementioned descriptors of the race were the most popular among respondents, with the authors noting: "When asked to choose a single word to describe the campaign, the results were overwhelmingly negative."

"Voters are clearly dissatisfied with the tone of [the] presidential campaign so far," Morris said.

Remember, this is a race that's included jokes about each other’s "manhood," consistent violence at one candidate's rallies and alleged cheating.

So, what type of leader do Keystone voters hope will emerge from such a pitiful race? "Honesty" was the top characteristic, with 107 saying it was the most important quality.

The poll was conducted from March 1-11 through live interviews. It had a margin of error of 4.8 percentage points.