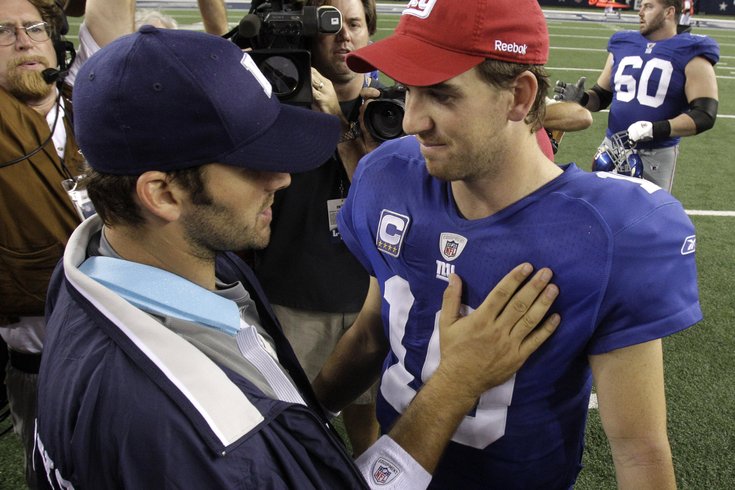 Tony Romo gets to second base with Eli Manning.

I learned something today. The offenses in the NFC East aren't really all that scary. That's the conclusion I've come to after putting together my preseason All-NFC East team. The Eagles in particular don't exactly have much in the way of ammo. Let's just get right to it.

If Tony Romo could stay healthy, he's probably the best quarterback in the NFC East. But the most important ability, as Chip Kelly used to say, is durability. I considered Kirk Cousins for a half second before remembering he's beaten like one team with a winning record in his entire career. Certainly, Sam Bradford has done nothing to warrant consideration here. So by process of elimination, I guess it's Eli. Bleh.

I hadn't noticed just how weak the running back position is in the NFC East until now, but good God it's ugly. Ryan Mathews, like Romo above, is probably the best of the bunch... when healthy... which he never is. Meanwhile, the Giants and Redskins are rolling out Rashad Jennings and Matt Jones, respectively. Again, bleh.

Yes, I get that Ezekiel Elliott has never taken a snap in the NFL, and yes I was adamant that he would not be a wise selection in the draft in the top 10 picks, but clearly, in my opinion, you'd be crazy not to take your chances with him over the rest of the NFC East's starting running backs.

Beckham is as easy a choice as it gets, as he is clearly the best receiver in the division at this point. Bryant had a down year in 2015, but he should obviously be a lot better in 2016. And finally, while Jackson's numbers weren't great a season ago while he nursed injuries, there isn't a better deep threat in the game.

Jason Witten has had an incredible career, but he's now 34 years ago, and very clearly in decline. Last season, Reed went off for 87 catches, 952 yards, and 11 TDs.

This is a close call between Smith and the Redskins' Trent Williams, both of whom are superior at this point to the aging and dinged-up Jason Peters.

The right guard spot is far better than left guard in the NFC East. If we're just taking any guard and not differentiating between left and right, I'd have Zack Martin (Cowboys), Brandon Brooks (Eagles), and Brandon Scherff (Redskins) ahead of Pugh here, but Pugh is the best of a weak bunch.

I smell Cowboys fans complaints coming. There are a few gifs of La'El Collins destroying people in the run game, and therefore he has become incredibly overrated, but he is a very inconsistent player with just as many bad moments as good ones.

There isn't much awe to Frederick's game, but he's a great technician who gets the job done. Jason Kelce has far more flare to his game and can do things athletically that no other center in the NFL can do, but he'll be rebounding from a bad season in 2015.

Brandon Scherff played well as a rookie for the Redskins, but Martin is already a consistent stud at the NFL level.

Hey hey! Finally an Eagle! This one isn't close. Johnson is by far the best right tackle in the NFC East, although he won't be for long. He'll be moving to left tackle whenever Jason Peters is done.