Projecting first-year roles for each of the Eagles' rookies 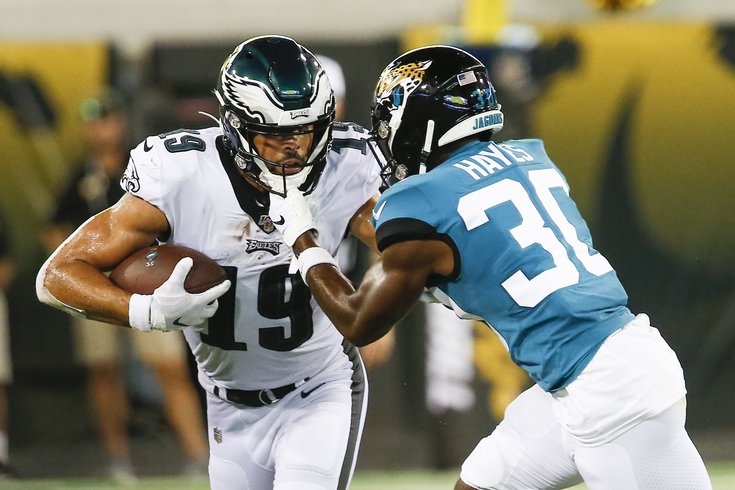 The Philadelphia Eagles have a loaded roster and a draft class that was only five deep this year. As such, rookie contributions this season should be relatively minimal.

Now that we've gotten a good look at the rookies throughout training camp and a pair of preseason games, let's take a look at how much each player is expected to contribute in 2019.

Dillard will be the backup left tackle in 2019, nothing more, nothing less, barring an emergency situation in which he is needed to play somewhere else. The Eagles have rightfully decided not to try to cross-train Dillard at other positions, instead opting to get him as many reps as possible at left tackle, which the Eagles hope will be his home for the next decade.

Dillard's athleticism was immediately obvious from the first day of rookie minicamp back in May, and he has gotten better along the way in some of the more physical parts of the position throughout training camp. Should Jason Peters go down, it appears that Dillard should be able to step in without necessitating the Eagles to change what they do offensively, as in, they won't need to overcompensate in giving Dillard significantly added help. The belief here is that Dillard would start at LT on plenty of teams throughout the league, in Year 1, and it's pretty easy to see why the Eagles traded up for him.

Sanders is clearly the most explosive runner on the Eagles' roster, but coming out of Penn State there were three concerns with his game. They were (1) pass protection, (2) receiving ability, and (3) fumbling issues. Let's address what we've seen in each of those areas, individually:

• Pass protection: Sanders has been much better in this area than expected. In one-on-one drills in practice, he has looked good, and is already better than guys like Wendell Smallwood and Josh Adams. He has looked to aggressively move up and attack blitzers close to the line of scrimmage, rather than wait for them to come to him, as many backs do. More often than not, he has won his matchups.

In the first two preseason games, when situations have arisen in which Sanders has needed to block, he has done well. Against the Titans, he had two free rushers coming at him, and he correctly picked up the inside guy, drawing praise from Doug Pederson.

"It was the right decision," Pederson said. "The thing about it was, it was the tackle spiked on V [Halapoulivaati Vaitai]. Had V anticipated the backer, he would have picked up one, because Miles was in the right spot. He was going to the right guy but ended up taking the most inside defender.

"Really between he and V, they were on the right spot. They were just a little bit late in recognizing what was happening. But he was in the right spot. It was a really good pickup by Miles."

Against the Jaguars, he did a great job on a blitzing linebacker coming full speed through the middle of the line. Sanders laid a good, physical block on him, stoning him dead in his tracks in the hole.

That's really well done. There was also a moment in the Jaguars game in which the Jags had a four man rush, and tight end Josh Perkins had a one-on-one matchup against a defensive end. After diagnosing that there were no blitzers coming on the play, he correctly helped out Perkins.

• Receiving ability: Sanders was OK catching the football throughout camp, making most of the plays that he should make, though he did have the occasional drop. At this stage of his career, he's not going to line up in the slot, Brian Westbrook-style, but he did display the ability to beat linebackers when he was matched up on them one-on-one out of the backfield.

I do think the Eagles can confidently use him in the screen game, and on somewhat more advanced routes, like a wheel, for example. I think he can have a similar role in the passing game that Corey Clement had his rookie season.

• Fumbling: He hasn't had any yet on a small tackling sample size.

As we've mentioned repeatedly, Sanders is very clearly the best running back on the team. He should start Week 1, but will he?

Arcega-Whiteside was very active in spring practices, and then he cooled off a little in the first half of camp, before picking up his reception volume again more recently. He is the clear No. 4 receiver.

Arcega-Whiteside has displayed good hands throughout camp, and feels like a more trustworthy receiver than the typical rookie. By that I mean that I don't believe it will take as long for Arcega-Whiteside to get a feel for the game at this level as it does for many other wide receivers. He is smart, and already has some polish.

As an added bonus, I like what I've seen from Arcega-Whiteside as a blocker. On Sanders' impressive run against the Jaguars on Thursday, Arcega-Whiteside did a nice job of negating the cornerback on the left side. His willingness and ability to block could help his chances of seeing some added snaps, particularly in the red zone, perhaps subbing in for DeSean Jackson.

He has also been getting work in as the gunner on the punt team.

Miller had a quiet start to camp, but he has occasional flashes where you can see his talent, and why the Eagles liked him. However, one of the knocks on Miller coming out of college was that he needed to add strength, an assessment I agree with.

There are five defensive ends ahead of Miller. Ideally, the Eagles can get Miller to agree that his achy toenail requires him to go on IR, where he can work toward getting stronger for a season in the weight room.

Thorson had an ugly start to training camp and an even uglier first preseason game, but I like the way he rebounded in the second preseason game in Jacksonville. The Eagles do not want Thorson to have to play in a regular season game under any circumstances, but he has some traits worth developing. I don't think the Eagles will risk exposing Thorson on waivers, and I believe he'll be on the 53-man roster.

UPDATE: Now that the Eagles are going to sign Josh McCown, Thorson's chances of making the 53 plummeted, as it would require the Eagles to keep four quarterbacks for him to stick.

I don't project any undrafted rookie free agents to make the team this year. The players with the best chance, in my opinion, are LB T.J. Edwards and OG Sua Opeta.