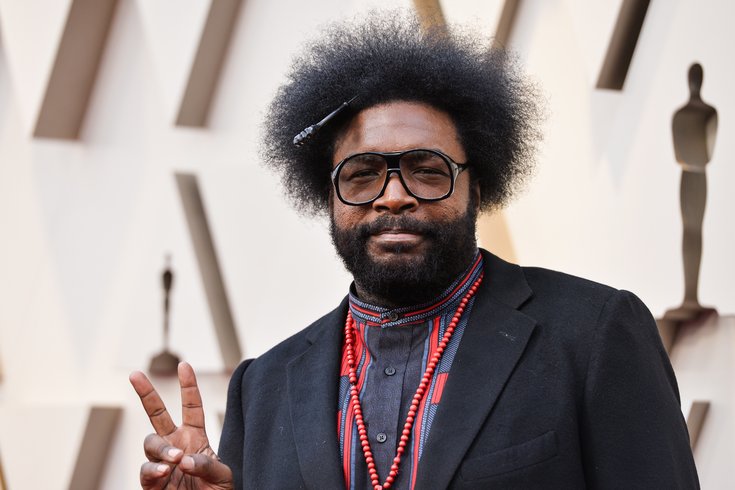 Questlove walking on the 2019 Oscars red carpet at the 91st Academy Awards held at the Dolby Theatre located at the Hollywood & Highland Center in Los Angeles, California on Feb. 24, 2019.

It's called the "Questlove Cheesesteak" and it'll be sold as early as March 28 at all 81 Phillies home games at Citizens Bank Park. It will also be available at The Met and BB&T Pavilion this summer.

This isn't the musician's first foray into food — in fact, he was nominated for a James Beard Foundation book award for his book "Something to Food About: Exploring Creativity with Innovative Chefs." He's been featured on "Parts Unknown" with Anthony Bourdain and has been featured on "Top Chef," too.

Ok yall, this was a year in the making so keeping this a secret was SUPER DIFFICULT!! I’m launching Questlove’s Cheesesteak! As a non vegan/vegetarian i still fell in love with @impossiblefoods for several years and as a Philadelphian....well—-i gotta know #CheeseSteaks right? We developed (and perfected!) a recipe using Impossible™ plant-based meat that we hope will offer a delicious and sustainable alternative for all cheesesteak eaters. Even better news for sports fans who never have food catering to those who are vegan/vegetarian we are debuting this cheesesteak THIS Spring at Citizens Bank Park during ALL @Phillies home games AND CONCERTS at the ballpark and in 40 @livenation venues ACROSS THE COUNTRY, and more soon! #Philly #Nationwide #QuestlovesCheesesteak #QuestLovesFood #AmorosoRolls @questlovesfood

The "Questlove Cheesesteak" will not just be sold in Philly, either. Over the next few months, Live Nation will add the sandwich to their menus at 40 venues across the U.S. According to Forbes, Live Nation had the first concert venues to add Impossible Meat to its menus.

In other Questlove news: The Philly favorite announced the 2019 Roots Picnic would change venues to the Mann Music Center this year. Here's the lineup and more details.