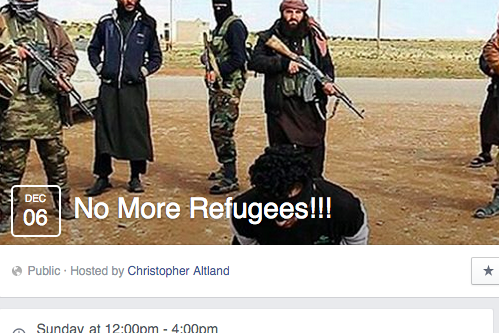 A group organized via Facebook says it will demonstrate outside Pennsylvania Gov. Tom Wolf's home on Sunday because of the governor's position that Pennsylvania would welcome Syrian refugees.

A “No More Refugees!!!” rally will fill a street in the tiny borough of Mount Wolf, Pennsylvania, on Sunday, beginning at noon.

Protesters are intent on assembling for four hours on Front Street, the street where Gov. Tom Wolf lives in York County. Wolf chooses to live in his own home in the borough of about 1,400 residents, rather than the state’s governor’s residence in Harrisburg.

Based on the event’s Facebook organizing page, many of those attending intend to be carrying firearms, some openly, some concealed. According to the Facebook page, 3,500 were invited, about 120 say they are coming and another 250 or so have expressed an interest in attending.

Organizer Chris Altland, 25, a resident of a nearby York County town, said the rally, organized on Facebook, is “for all Americans, no matter their skin color or religion.”

The header of his page features an image captured a moment before the beheading of a man by Islamic militants in the Middle East. Many of his page’s followers have posted anti-Muslim comments or feature anti-Islamic comments on their own home pages.

One person posted about plans of hawking $25 hoodies with the saying “Proud Infidel. --ck Islam. And --ck Muslims” with a stars and stripe background.

The Facebook profile pictures of those who have posted are almost exclusively white: a restaurant hostess, a mechanic, a nail salon tech, a retired engineer and even a Mary Kay cosmetics saleswoman. 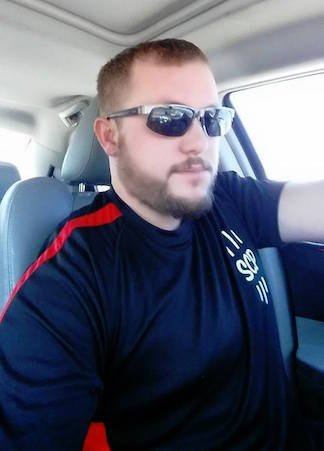 Altland, who does drafting and engineering for a living and “hunts, fishes and shoots pool” in his off hours, and has a concealed carry permit, advised some caution on his Facebook page about bringing guns to the rally.

“I have no problem with people carrying, but we can’t get out of hand with it. I advise people to keep it concealed if you have the proper permit to do so.

“If not I will not infringe on your constitutional rights. Carry away,” he wrote.

In an interview, he said he’s had no pushback from local authorities and he expects no problems or violence.

"Myself the and the organization I (represent)  are not responsible for what other people say,”said Altland of some of the anti-Muslim comments made on his Facebook page by others.

"We are constitutionalists who believe that if laws of safety are written for the protection of this country, they should be followed to the letter. We as citizens are punishment for the slightest infringement of laws.

"We are a peacful people just trying to keep up with the many flaws and inconsistencies of government. We are many, we are the III percent."

Atland said with the problems already facing America, there’s no reason to accept what he perceives as the potential security risks posed by taking in refugees.

In September, he pushed a petition aimed at Wolf and what he sees as a judicial infringement on the Fourth Amendment of the Bill of Rights, which assures against search and seizure by authorities without judicial authorization.

Altland describes himself as a conservative, a “constitutional patriot” aligned with the III percent movement, a reference to the percentage of colonists who took up arms against the British.

The local police chief, Bryan Rizzo, has read the postings, including those about guns.

His local police will barricade the street, keeping the protestors safe from traffic and the governor’s property free of protestors, he said.

He said there’s been no final decision if the governor will be at his home or elsewhere. The protection of the governor falls to the Pennsylvania state police.

The governor’s office did not respond to a request for comment.

Trooper Adam Reed said the full-time security detail assigned to Wolf is aware of the protest and of the plans by many to carry weapons.

But he declined to comment on details of the protection plan and if Wolf will be present or not.