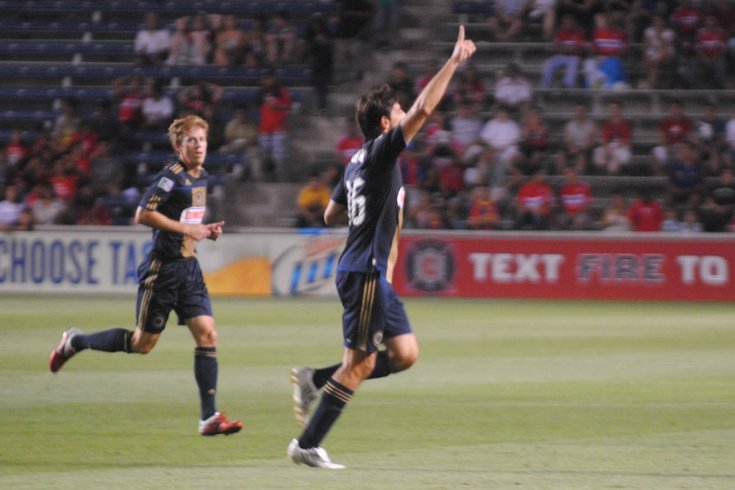 Veljko Paunovic celebrates after scoring a 30-yard bomb against the Chicago Fire in the summer of 2011.

It's a slow week in Chester as Major League Soccer pauses for the June international break.

A few weeks back, after Fabian Herbers scored a ridiculous banger against D.C. United, a couple of readers mentioned that they'd be interested in a PhillyVoice story about the best Union goals of all time.

This seemed like a good week to write it up.

There's no real science behind the rankings. I did try to ignore the context of the match and season, which means that a game-winning goal or playoff goal shouldn't get any extra consideration.

Kleberson's 2013 free kick, for example, doesn't get bonus points for keeping Philly in the 2013 playoff race. We're not weighing the first goal at PPL Park, or the first goal in franchise history, or anything along those lines.

I just tried to judge the goals on the overall skill, technique, and build-up play involved. Even if the finish was relatively simple, I wanted to include the passing and movement leading up to it, since I think all goals should be assessed from genesis to completion and not just the "highlight-reel" end product.

Here's what I've got. If I missed any, leave a comment below.

Veljko Paunovic only played 16 games for the Union, but he quickly shrugged off the label of "old Serb" to become a 2011 fan favorite.

In August of that season, he blasted in one of the best long distance goals in Union history with his weaker left foot, a line drive that barely came off the ground and beat Sean Johnson from 30 yards out.

When you hit a one-timer into the opposite corner from 19 yards, you enter the top 10.

And it doesn't even matter if the ball came off his foot or shin here because the technique to simply use the weight of the pass and redirect the ball is top notch.

This was goal two of Sebastien Le Toux's famous hat trick at Lincoln Financial Field in 2010.

It was a clinical counterattack that saw Alejandro Moreno exhibit some brilliant hold-up play inside his own half, then hit one of the best passes I've ever seen from a Philadelphia Union player.

Finding Le Toux in stride, the striker's first touch is impeccable, pushing him away from two defenders and giving him an angle to slide a side-footer past Troy Perkins.

One of my all-time favorites, this was the best counterattacking goal the Union have ever scored.

For context, Philly was playing down a man in the 2015 U.S. Open quarterfinals at Red Bull Arena. Conor Casey had been sent off for a questionable stomp on the heels of Red Bull fullback Connor Lade.

Vincent Nogueira, receiving the ball in his own half, dummies Sacha Kljestan and outlets for Le Toux while continuing his run. Le Toux hits a perfect return pass with the outside of his right boot, springing Nogueira for a square ball to Eric Ayuk.

No one expected the Union to go Los Angeles in 2012 and beat the defending champions.

But that's exactly what happened, and Philly scored two great goals on the road to get the job done.

The first was a clinical backheel, perfectly placed by Jack McInerney from the tightest of angles.

I'll put both of these goals in a fifth-place tie, since they are almost exactly the same thing.

Both took place from the ame spot on the field, both took place in the final minutes of the game, and both beat the same goalkeeper, Joe Bendik.

If we're nitpicking, Barnetta's strike had more curve and struck the crossbar in a perfectly-positioned manner. Kleberson's free kick came in a bit faster and wasn't as close to the corner. That's about the only difference I can come up with.

The Kleberson goal obviously drew a bigger reaction, since it kept the team in the 2013 playoff race and it was hit by a guy who had hardly played that season. Barnetta's goal came early in the 2016 campaign.

Alejandro Bedoya wasn't brought to Philadelphia to score goals, but this stunner against Toronto breaks the top-five.

Mike Farfan scored the goal of his career in a friendly match against Real Madrid in the summer of 2011.

I give it the nod over Bedoya's chip, since the distance it a little closer, making it harder to get the ball up and over the goalkeeper. Also, his awareness in getting into that pocket of space and quickly firing off the shot really makes the play shine.

This might be too high of a ranking, but it's the best touch I've ever seen from a Union player in 7 1/2 seasons.

Don't underestimate the degree of difficulty here. Le Toux brings the ball down with his weaker left foot, then finishes with his right without even breaking stride. It's a world class finish made simple by an absolutely sublime first touch.

No explanation needed when you score a weak-footed volley from 35 yards.