Steinke stepping down, but moving on up. 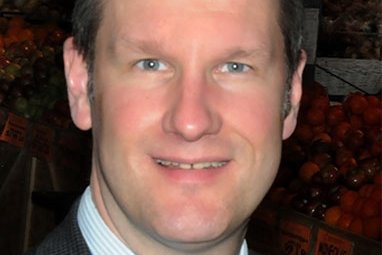 Paul Steinke stepped down as general manager for Reading Terminal Market on Dec. 31.

After a 13-year stint, Reading Terminal Market's Paul Steinke bid farewell on Dec. 31 to his gig as general manager of the food hall.

The change comes as Steinke prepares to announce a different kind of bid -- for city councilman. On the doorstep of the new year, Steinke announced on Facebook the announcement of his campaign (because that's what people do these days). The event will be held Jan. 13 at Field House, with a modest Facebook guest list of 1,400 people.

But until ballots are cast this fall, Steinke will remain best known as the guy who kept Reading Terminal afloat during hard times.

"Paul worked very hard over the last 13 years to improve the Market: the way it operates, the level of quality of the food, the diversity of the food product offered -- even the way the market looks," Sarah Levitsky, marketing and events manager for Reading Terminal Market, told PhillyVoice.com. "He's left big shoes to fill."

Most notably, Steinke oversaw 2012 renovations of the market that essentially chucked storage boxes from the market's east end into the basement, opening up space for more vendors. The renovations also included new restrooms.

Levitsky said the market's board has not yet found a replacement for Steinke, but that a "national search" is underway. No timeline was given for finding a replacement.

Steinke does have advice for whoever fills those Big Foot-sized shoes, however.

"The market needs to respect its traditions," Steinke told NewsWorks Tonight's Dave Hall in an interview. "But the market also needs to stay current on the latest in food trends and to gently adapt as much as possible."

You can read the market's set-in-stone mission statement here, which has an interesting line about strengthening the "mutual dependency of our rural and urban areas." It will be fascinating to see how the market re-approaches its mission statement once new leadership is at the helm.

But in the meantime, go grab a craft soda at the market from York's Wyndridge Farm. Because that kind of kooky offering is what the market's actually known for these days.