Reading Viaduct getting pop-up garden in 2016 as part of $9.6 million in Pew arts grants 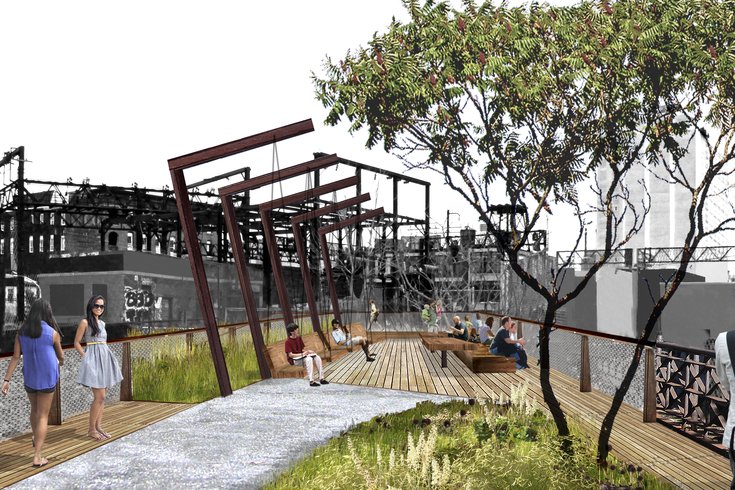 A rendering of what the Rail Park, which is being implemented by Friends of the Rail Park and Center City District, could become.

The Pew Center for Arts & Heritage announced late last night its 2015 Philadelphia grantees, which includes a series of "community intervention" installations that will introduce Philadelphians to the three-mile stretch of the Philadelphia Rail Park, culminating in a summer 2016 PHS pop-up garden.

The project, according to Pew, is intended to showcase the architectural heritage of the space, but with a modern twist that includes video projections in the tunnels of the Viaduct, steam plumes rising from the grates of the Pennsylvania Avenue tunnel and a recreated locomotive-engine art piece to be displayed at what was formerly Baldwin Locomotive Works. The project, a nod to the Viaduct's past that will be put together by designers, historians and artists, will serve as a spring lead-in to the summer opening of a Pennsylvania Horticultural Society pop-up garden -- the location of which was unspecified.

Whether or not the pop-up garden will serve beer has yet to be determined.

“We’re exploring a number of different approaches for the Rail Park, and anything is possible, ” said Alan Jaffe, Director of Communications for PHS.

Philadelphia Rail Park recently secured most of its Phase I funding, and hopes to break ground in the fall.

Project grants are, by Pew's own definition, "designed to support the presentation of exceptional cultural programs and experiences by Philadelphia-area artists and organizations for a wide range of audiences." Each project is awarded up to $300,000, which includes operating costs.

Below are a few more project highlights from the funding round:

In a partnership with FringeArts, French choreographer and experimental dancer Boris Charmatz will host a 12-day residency at Westphal College, performing his "Suspension of Conflicts" performance piece.

Composer Vijay Iyer and poet Mike Ladd will work with local veterans to create a multimedia piece, in partnership with Warrior Writers.

Charles Sheeler's buried works of fashion photography will be spotlighted at Bucks County's Michener Museum, works captured from 1926 to 1931 for Conde Nast.

As part of a collaboration with Equality Pennsylvania and WHYY, the Independence Visitors Center will host a reenactment of the 1965-69 protests at Independence Hall.

Artist Michael Rakowitz will conduct a "participatory performance" at Independence Mall, complemented by a 10-episode radio series that aims to draw a national audience.

Being described as an art installation you can "ride in," the Cai Guo-Ciang will bring his 27-piece "Fireflies" sculpture exhibit. Viewers can see the luminous pieces through carriage on the Parkway.