After years of planning, a two-block section to open Thursday 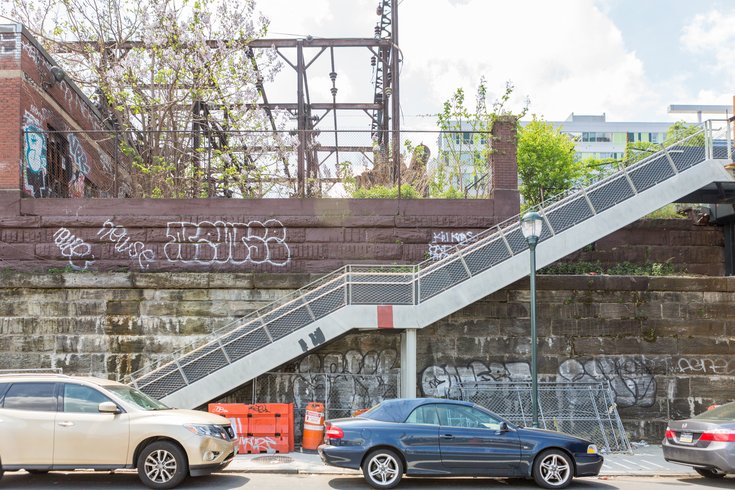 Stairs leading from Callowhill Street will provide access to the south end of Phase 1 of the Rail Park.

The time has finally come.

The Rail Park's grand opening is happening this week with a ribbon-cutting ceremony at 11 a.m. Thursday at 13th and Noble streets.

The three-mile-long elevated park is slowly being unveiled — make that conceptualized, built and still fundraised — in phases. The segment opening this week runs along Noble Street from 12th to Broad streets.

We've had this date on our calendars since early May and it's been in the works for even longer — it all started back in October 2016, to be exact. So Thursday will be a big deal.

Highlights of Phase 1? We took a tour in May and saw some fun swings, great views and lots of green space. Here are our photo previews. Here's a full map of the park and your resource to keep updated on next phases.

Never heard of the Rail Park? It's the old Reading Railroad Viaduct. It was built in the 1890s, once transporting both passengers and freight to and from Center City. But trains ceased running along the viaduct in 1984, leaving it unused for decades.

Now, thanks to a nonprofit community organization called Friends of the Rail Park and the Center City District, enough money has been raised — more than $9 million — and community support garnered to turn transform the space into a park.

It's been compared to New York City's High Line, and we're really hoping it serves as a meeting place for all kinds of Philadelphians. After all, if the entire strip is completed it would connect Chinatown all the way to Brewerytown.

So far, there's no announced plan for what will be built next or when we'll see it.