Some skaters feel Mayor Kenney's five-day reprieve is too little, too late for iconic spot 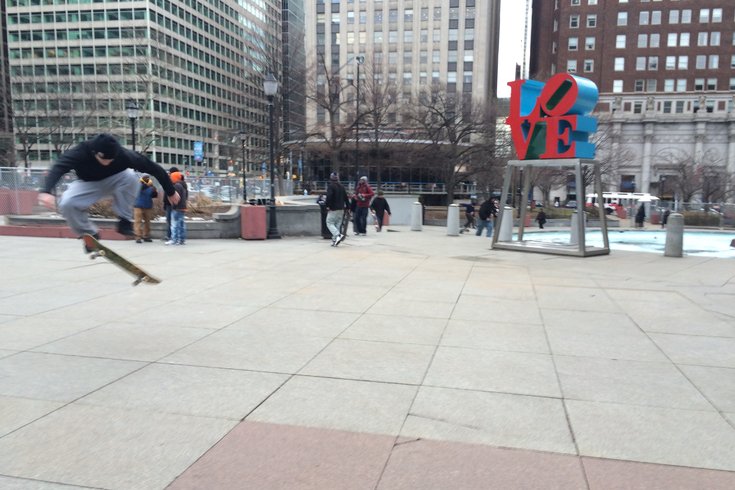 Mayor Jim Kenney lifted the ban on skateboarding that had been on the books since 2003 on Wednesday.

And, shortly after the mayor's announcement, dozens of skateboarders filled the park, ready to reclaim a piece of skateboarding history.

"What's next? Are they going to fix the crack in the Liberty Bell? Nothing they do will ever be close to this place, and we are just getting more and more spots taken from us." – Skateboarder Richie Scheerer on Love Park

But with the ban lifted only until Feb. 15, some said they thought the mayor's efforts to legalize skating at Love Park were too little, too late. Others expressed regret that with renovations set to begin on the park – and turn it into a lush green space – Love Park will become unskateable and an era will end.

"It's like having someone you know on death row," said Richie Scheerer, who said he's been skating at Love Park since 1999.

Scheerer said even when the city started imposing fines on skaters at Love Park, it didn't stop dedicated skateboarders from hitting the ledges, the benches and jumping the fountain gap at Love Park.

Asked if he was looking forward to the park's redesign – set to open in the spring of 2017 – Scheerer said that the redesign erases the history of Love Park.

"People don't know how important Love Park is for skating," he said.

Scheerer argued that with the Love Park redesign and the recent renovations to nearby Dilworth Park at City Hall, Philadelphia is losing some of it's most important landmarks.

"What's next? Are they going to fix the crack in the Liberty Bell?" he asked. "Nothing they do will ever be close to this place, and we are just getting more and more spots taken from us." 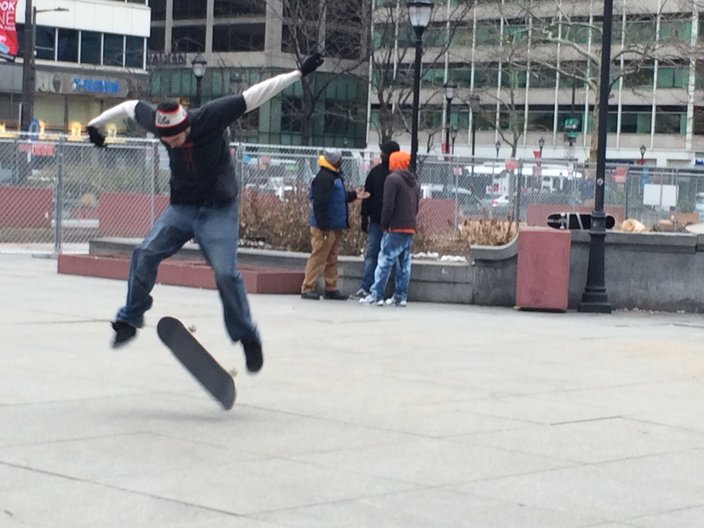 Skater Matt Gallo, 24, flips his board during a trick on Wednesday. Gallo joined dozens of other skateboarders to celebrate the city's lift of the skateboarding ban at Love Park.

Others at the park Wednesday agreed.

"Love Park is just perfect," said Mike East, as he took a break from skating. "It's such a historic landmark. People come from around the world for this place."

Some argued that the ban is only temporary, with many saying that if the plan all along was to allow skating before construction begins, why not announce it months ago when plans were finalized instead of waiting until the bitter cold weather of February.

"I wish it could have been this way all along," said Matt Gallo, 24.

A skateboarder who asked to remain anonymous, said that he had his skateboard confiscated earlier this week for skating at Love Park. If the city was planning to allow skateboards at Love Park, he asked, why not allow it earlier or, just stop enforcing it, instead of making an announcement at a press conference.

The skater said he saw it as a move for elected officials to try and look good, not a move that really supported skateboarders.

"I'm grateful for the opportunity to skate, but, what are they going to do, add some grass?" he said, pointing to a small patch of rutted grass already at the park. "Look at the grass here. They can add grass, but they aren't going to have the ability to keep it from turning into Philadelphia."

Reminded that there is a skate spot in Franklin's Paine Park, near the Philadelphia Museum of Art, skateboarders at Love Park scoffed.

Skater Marcu Waldron said that Franklin's Paine Park doesn't have the history or unique feel of Love Park. Instead, he likened that spot – designed specifically for skateboarders – to a fishbowl, saying that the city built it as a way to keep skateboarders away from Center City spots, like Love Park.

"That place wasn't made by skateboarders," he argued.

Also, Waldron said, by seeing Love Park turned into a green, open space, the city is disrespecting the skateboarding community that has such reverence for what Love Park used to be for the skating community.

"That park is a piece of history, and we are losing that history," Waldron said. "That doesn't sound very good to me."