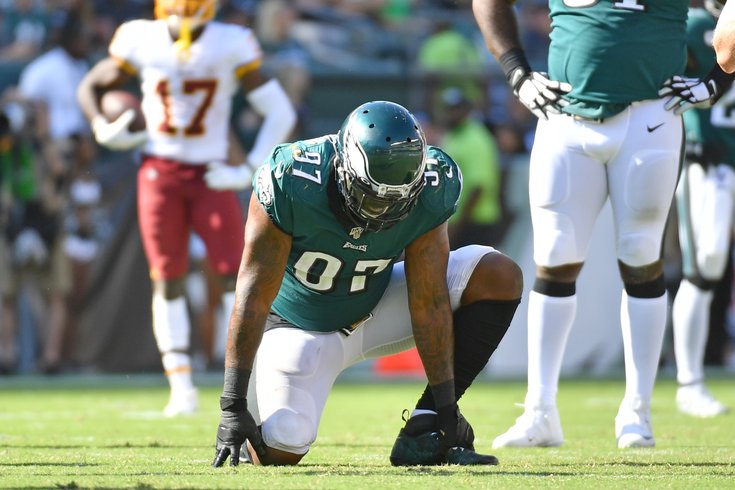 According to a report from Mike Garafolo of NFL Network, defensive tackle Malik Jackson's season is over after it was determined that a Lisfranc injury in his foot will require surgery.

#Eagles DT Malik Jackson is expected to miss the season with a Lisfranc injury suffered Sunday vs. the #Redskins, sources tell me and @RapSheet. Jackson will have surgery next week. Tough one for Philly despite their DL depth.

"Malik is an important part of what we do, and we'll certainly miss him when he's not on the field," Jim Schwarz said on Tuesday. "But we have plenty of guys that can step up and play. And that's nothing new in the NFL, doesn't change our task from game to game and it doesn't change our task over the course of the year. We'll get him healthy and get him back. If I know Malik, he'll do a good job staying engaged while he's rehabbing. I've been really impressed with him as a professional, not just as a player, but as a professional, I'm sure you guys have too."

The loss of Jackson will hurt, however, it's not as if the Eagles don't have depth at defensive tackle. Surely, there are players who could have gone down that would have created bigger holes. Timmy Jernigan is perfectly capable replacement who played well Week 1, after missing almost the entirety of the 2018 season with a mysterious back injury. The Eagles also have Hassan Ridgeway, who had a nice camp.

"It was a tough year for Timmy last year, coming back from an injury and working hard to get back on the field," Schwartz said. "That's tough for any player. But he's a good player. We saw that in the plays that he played on Sunday and we're going to need him to get back to that, which I think he is. He made a lot of plays in training camp practices, maybe some that you guys saw, maybe some that you guys didn't. But we have a lot of confidence in him, not just against the run but against pass also."

The Eagles' next move will be to place Jackson on injured reserve, and replace his roster spot with another player. That will likely be another defensive lineman. Here are some options:

• DT Bruce Hector: He's on the Eagles' practice squad right now, and he appeared in 8 games for the Eagles a season ago, though he wasn't very effective.

• DE Chris Long: Long retired this offseason, partly because his obvious passing down snaps were going to dry up as a result of Jackson joining the team. It is unknown whether Long has kept in "football shape" this offseason. I would view this as an unlikely possibility.

• Poach someone off of another practice squad: This is how the team landed Treyvon Hester last season.

• Sign a vet off the street: If so, keep your expectations low.

• Trade for someone on another team: That's an unlikely scenario at this point in the season. If the Eagles' defensive line falters over the first half of the season, this would be a more realistic possibility closer to the trade deadline.