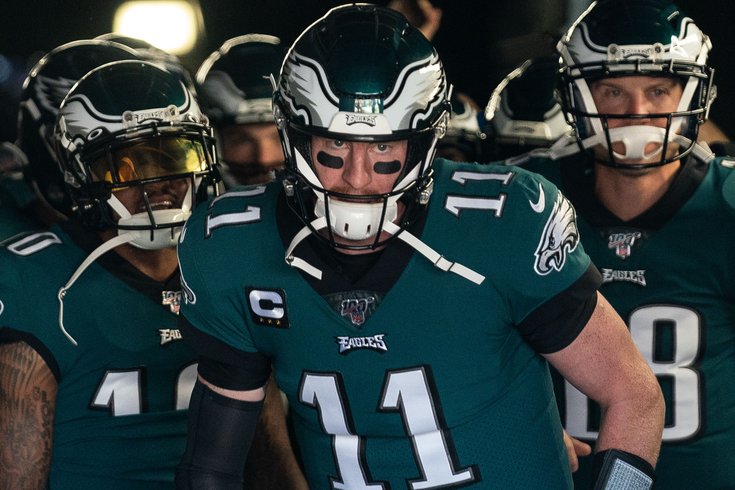 It was very, verrrrry ugly for 30 minutes, but the Philadelphia Eagles picked up a win on a 32-27 comeback victory over the Washington team.

In his return to Philadelphia, Jackson came up huge, catching eight passes for 154 yards and two TDs, including two 50-plus yard bombs, generating instant offense when the Eagles needed it the most. Here's the first one:

Aaaaaand the second one:

DeSean Jackson is having one hell of a homecoming 🔥🔥 @DeSeanJackson11 pic.twitter.com/e1b8Oim7gz

I'm of the opinion that Chip Kelly did not do a smart thing when he cut one of the greatest deep threats in the history of the sport because he didn't like him.

OK, so Wentz was always good, but his performance on Sunday should sway some naysayers who were skeptical of his abilities because he got hurt a few times.

On the day, Wentz was 28-for-39 for 313 yards, three TDs, zero INTs, and a QB rating of 121.0. He found Jackson and Alshon Jeffery twice each for touchdowns, except that one of the Jeffery passes went backwards, was considered a lateral, and Jeffery got credit for a rushing touchdown.

Here's the dime to Jeffery in the back of the end zone:

Wentz faced a 17-0 deficit that wasn't really his fault in any way, but he stayed poised and simply made plays, leading an impressive comeback for a win. (To note, that won't actually count as a "comeback" in the stat sheet, since the Eagles were never behind in the 4th quarter, which just goes to show how stupid that stat is.)

Wentz can absolutely have an MVP-caliber season in 2019, and, well, he's off to a good start.

The Eagles' start to this game was brutal, on both sides of the ball, really, which was a continuation of how they started games a season ago.

In fairness, a few oddball things happened on the Eagles' first two drives. On their first drive, Washington CB Quinton Dunbar was head-butting Eagles receivers after every play, and when Jackson pushed his head away after one, Jackson got a 15-yard flag. That immediately ended a drive. On drive No. 2, which was 12 plays long, they had a ball batted at the line of scrimmage on fourth down.

They'll be better in the first quarter this season, but obviously, they cannot make a habit of needing excuses to explain away a lack of points.

On the first drive of the second half, the Eagles faced a 4th and short from their own 34. In my view, down 13, that was as obvious a "go for it" situation as there is, and yet, I'd bet that almost every other coach in the NFL would punt.

Pederson went it, with Carson Wentz easily picking up the first down on a QB sneak, and yada yada yada, the Eagles scored on that drive.

Asked if there was any hesitation on making that call in that situation, Pederson responded, "None. None. It was half a yard. No hesitation."

Yes, Doug, but could you maybe put that in terms that the non-analytics nerds can understand?

5) The 'No Pressure' Award: The Eagles' defensive line

The Eagles' defensive line is a talented group, and sort of the straw that stirs the drink in the Eagles' defense. When they don't get pressure on the opposing quarterback, however, which they didn't today, the secondary, well, let's just move onto the next award...

6) The 'Roasted' Award: The Eagles' secondary

In our Hierarchy/Obituary earlier in the week, here's what we said about Washington's offense:

And then... Keenum completed 30 of 44 passes for 3 TDs and 0 INTs, with guys like Terry McLaurin running free all day through the secondary.

The Eagles looked particularly susceptible to the deep ball, which hurt them a year ago as well. They have to get that cleaned up before they face some actual good players.

On the first drive of his Eagles career, Sendejo kinda tripped / kinda stopped following Vernon Davis on a simple flat route, gave up a first down on 3rd and 2, and then compounded his bad coverage with a hideous tackle attempt, before Davis ran 48 yards for a TD:

Vernon Davis leaps over a tackle and breaks through another, turning a simple underneath pass into a 48-yard TD #Redskins pic.twitter.com/GgGIApa0EQ

Gross. As a reminder, the Eagles would rather have Sendejo than a fourth-round pick.

When asked if he has been waiting for months to capitalize on poor play by Sendejo to make a point about compensatory picks, PhillyVoice writer Jimmy Kempski said, "Yes, this was truly satisfying to write."

8) The 'Too Many Touches?' Award: Darren Sproles

While Sproles had some nice moments against Washington, I don't think he should ever be leading the team in touches, like he did Sunday, when there are so many other major weapons in the offense.

Foles was off to a fast start in Jacksonville today, when he was 5-for-8 for 75 yards, and this TD pass:

Unfortunately, he broke his clavicle and will be out for a while.

Any interest in Nate Sudfeld, Coughlin?

Next week: In Atlanta. (The Falcons got dominated by the Vikings Week 1.)