What they're saying about the Eagles: Carson Wentz has never looked better, making sense of running back rotation and more 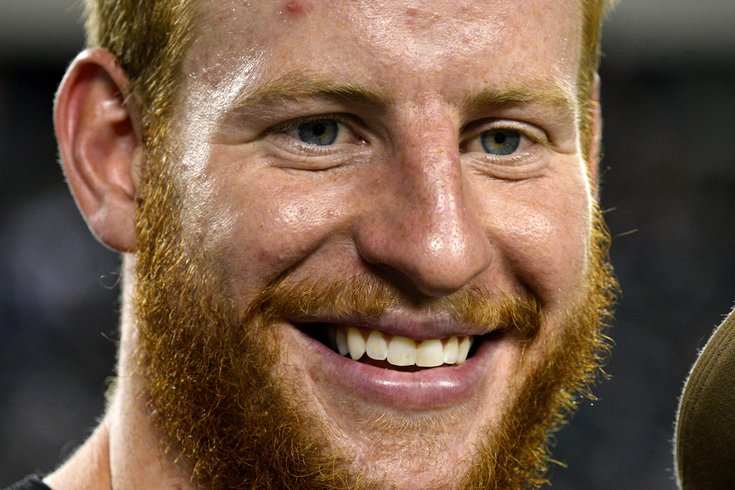 Week 1 is in the books, and 60 minutes of Eagles football is now on tape for fans and beat writers to dissect as we wait for more football next weekend.

We took the liberty of curating some of the more interesting takes from major news outlets that cover the Eagles, and our favorites are here for your consideration:

We'll start perhaps the most positive take we've seen — a look from ESPN's Tim McManus at Wentz' incredible performance in Week 1. After having no preseason to ramp up and after missing some extremely important games at the end of last season, McManus argues that Wentz is looking even better than the 2017 near-MVP performing Wentz did.

Wentz absorbed little punishment, despite playing against a quality Washington front. The Redskins had four quarterback hits and one sack, and the sack was a Wentz scramble that ended with no gain. He credited his offensive line for their efforts, but the statistics show that he was helping himself. He got the ball out in 2.66 seconds on average, which ranked 10th among qualified Week 1 QBs through Sunday night. Last season, he got the ball out in an average time of 2.77 seconds, which ranked 19th. It's a small sample, but it's representative of the adjustments that can limit the punishment and help Wentz stay upright.

Meanwhile, his average time in the pocket was 2.37 seconds, compared to 2.18 in 2018 -- a sign that he was allowing slightly more time for plays to develop before bolting into the unknown.

While Wentz is in some ways coloring outside the lines less, he still has a tremendous amount of freedom to call plays at the line of scrimmage. He was a blazing hot 12-of-13 for 197 yards and three touchdowns on third down Sunday, and he revealed afterward that he was calling the shots in many of those circumstances, particularly in the second half, when the offense caught fire. [ESPN]

Speaking of third down...

Over at Bleeding Green Nation, Tyler Jackson took a deep third down dive, breaking down the impressive conversions on 60 percent of tries in Sunday's win. Jackson notes that the Eagles were second in the NFL, converting on 44 percent of attempts in their Super Bowl campaign two years ago before dropping to the middle of the pack last year.

For the Eagles, it’s highly unlikely they convert over 60 percent of their third down attempts moving forward, but Sunday’s win was encouraging. It was a return to a high level of coaching and execution for the team after 2018 produced largely mixed results. My other takeaway is how well the team utilized Jackson. Referencing 2018, the team struggled finding a roll and utilizing Golden Tate. That’s not the case with Jackson. The team wasn't afraid to call his number or consistently go to the well and the timing between the receiver and his new quarterback was evident from the start. If the team continues to gel and fire on all cylinders the way it did in the second half, it will be hard to make an argument against the championship aspirations. [Bleeding Green Nation]

The Inquirer's Mike Sielski took some column inches to look into the hierarchy of running backs for the Eagles — Miles Sanders, Jordan Howard, Darren Sproles — to contemplate which one is the lead back — and came to the conclusion that in Doug Pederson's offense, it really doesn't matter. Having the right group with the right differentiating skills, Sielski notes, is the entire point and the Birds are in much better position at RB this season than they were this time last year.

Sunday was an example of the strategy at its best, but it’s fair to characterize its results as mixed since Pederson became the head coach in 2017. The approach worked splendidly in 2017, particularly after the Eagles acquired Jay Ajayi from the Miami Dolphins midway through that season. Their backfield depth was never more evident than in Super Bowl LII, when LeGarrette Blount rushed for 90 yards and a touchdown, Ajayi gained 57 yards on just nine carries, and Corey Clement caught four passes for 100 yards and a touchdown.

They never had that depth in 2016, and they lacked it last season, too. Ajayi, Clement, and Sproles got hurt, and Josh Adams and Wendell Smallwood weren’t capable of picking up the slack.

That regression contributed to the Eagles’ squandering late leads in losses to the Titans and Vikings, and it led Roseman to trade for Howard, use a second-round pick on Sanders, re-sign Sproles, and reportedly explore trading for the Chargers’ Melvin Gordon. [Inquirer.com]

The running backs issue is not really an issue — the Eagles won — but the fact that Darren Sproles had nine carries and Jordan Howard had just six Sunday is odd. Howard doesn't seem at all phased by it, however, as Reuben Frank delves into on NBC Sports Philly's website:

On the Eagles’ first drive of the second quarter Sunday, Howard got the ball on three straight plays — a pass and two runs — and netted 17 yards.

Then the Eagles ran 44 consecutive plays without Howard touching the football.

Then he got another three straight plays deep in the fourth quarter and ran for 29 more yards.

The Eagles had 10 drives in their 32-27 win over the Redskins Sunday, and Howard touched the ball on just two of them.

“Everybody gotta eat in the offense," he said. [NBC Sports Philly]

Perhaps the worst outcome of the Eagles 32-27 win in Week 1 was the loss, for significant time, of defensive tackle Malik Jackson. According to both Bo Wulf and Zach Berman, Eagles beat writers for The Athletic, the injury sort of messes up Philly's entire strategy for rushing the passer. Here's a little more on why:

With Jackson out for the foreseeable future, Brandon Graham is now likely to slide inside more on passing downs (I always thought the idea that Jackson would allow Graham more time on the outside was a waste of what makes him special). Whom, then, can you count on to make a play on the outside beyond perhaps Derek Barnett?

It was always surprising to me that Roseman did not make more of a major move to bolster the edge rush given the win-now timeframe and what we know of his team-building philosophy, especially on the heels of the Bennett and Long departures. Both would be tremendous assets at the moment. Do you think Roseman has already contacted Long about a potential return? Is there another move in his back pocket? Hassan Ridgeway had a few nice snaps on Sunday, and maybe he can prove interesting. Maybe Daeshon Hall can do in the regular season what he did in the preseason. [The Athletic]