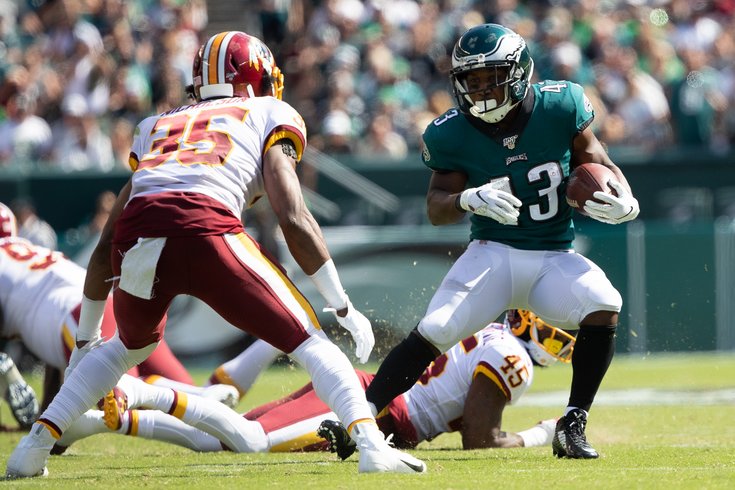 Darren Sproles led the Eagles with 12 touches on Sunday.

In Week 1 of the Philadelphia Eagles' 2019 season, the Birds controlled the clock for the majority of the second half, and as a result, had more offensive snaps than defensive snaps.

There's a lot to evaluate here, especially on Week 1, so let's get right to it.

Analysis: Brooks was taken out of the starting lineup in the second half (the fourth quarter, maybe?) after he had already logged 55 snaps. According to Doug Pederson, with Brooks having torn his Achilles fewer than eight months ago, getting Brooks out of the game early was "part of the plan" heading into this game, and that Brooks did not get hurt. As he did all throughout training camp, Vaitai played RG in relief of Brooks.

Otherwise, Dillard got his feet wet a little as the sixth lineman in jumbo sets.

Analysis: It's surprising to me that Sanders got 13 more snaps than Sproles. It sure didn't feel that way during the game. On Sproles' 23 snaps, he got nine carries and three receptions for a total of 12 touches. On a team that is loaded with explosive talent, I don't believe that Sproles should ever be leading the team in touches. Doug Pederson seemed to indicate that the plays designed for Sproles were the ones that were working, not necessarily that he prefer Sproles over the other runners.

"Some of it was by design, some of the plays that were effective," said Doug Pederson. "As you know, when we construct games, we have multiple run schemes and they are designed for different guys. The ones that were kind of clicking today were the Darren ones, and so just kept calling his number there. Those other two guys I thought ran well, also. Unfortunate we get the late holding call late in the game there on that one, but Miles is explosive, as you know. Jordan ran extremely hard. So excited for all three of those guys."

Personally, I liked the way Howard ran on Sunday, and think he earned a few more carries going forward. It also appeared as though Sanders held up well in pass protection. It's clear after just one week that the RB rotation is going to be a fun debate all year.

Analysis: Jackson was in on 69 percent of the snaps, which is both #nice, and right around an ideal amount of snaps for him.

As expected, Agholor didn't see a precipitous drop in snaps. What wasn't expected was that Hollins is ahead of Arcega-Whiteside on the depth chart.

Analysis: Goedert only played on 55 percent of the snaps, which is understandable seeing as Washington was missing their starting slot corner.

Analysis: In what should have been a lopsided advantage in favor of the Eagles, Washington's offensive line was able to keep the Eagles' pass rush away from Case Keenum for most of the day.

Jackson came out of the game in the final drive with a lower left leg injury, and he left the stadium in an air cast. MRI today.

A surprise before the start of the game was that Sweat was active over Daeshon Hall. Sweat was clearly outplayed by Hall in the preseason games, but Sweat played Week 1 because he's better against the run, apparently. I don't get that logic, if true. The three defensive ends ahead of Sweat and Hall — Graham, Barnett, and Curry — are all very good run-stuffers. Why do you need a fourth run-stuffer? And sure, while Washington, on paper, appeared to have a crappy passing attack heading into this matchup, it's not like they're Army or something. They're going to throw the ball more than they pass this season, and probably by a wide margin. Play the guy who can create havoc.

Analysis: Maddox was the constant in the slot, while Douglas, Darby, and Jones all cycled in as outside corners.

"It's all part of the plan, early in the season like that, especially with Darby, putting him on, not a pitch count, but a rotating basis," Pederson said. "All of those guys were going to play. When you have four corners out there and the three that played corner position, obviously, but yeah, all part of the plan."

We'll get a better sense of the logic behind the rotation, whether certain players are used in specific situations, when Jim Schwartz speaks to the media later this week. Or not. ¯\_(ツ)_/¯

If I'm the Eagles, I'm looking hard at safeties around the league that I can acquire at the trade deadline with the fourth round pick I'd gain by ditching Sendejo.