Report: Philly among cities with most anti-transgender tweets

Philadelphia is one of the cities where the most tweets making derogatory comments about transgender people are sent, according to a recent analysis.

The real estate website Abodo scraped Twitter data from June 2014 to December 2015 to find which states and cities espouse the most "prejudiced language" on the social media website.

According to the site, Philadelphia had the sixth-most tweets making slurs against transgender people with 19 per 100,000 tweets.

The analysis also included derogatory language tweeted about other groups that commonly face discrimination, including women, African Americans and Hispanics, among others.

As Slate noted, many of the terms used for some of those groups "have been reclaimed to varying degrees by the communities they were created to denigrate."

For the transgender community, however, it's hard to imagine most of the slurs flagged by Abodo being used in a positive light; the exceptions, possibly, being "man in a dress" or "men in dresses" — terms that may have been tweeted out during the annual Mummers Parade when participants wear costumes.

Although the study does say it "attempted to analyze the results within local context, as interpreting these findings requires attention to regional events, trends, and culture.”

Leading the country in anti-transgender tweets was Las Vegas with an alarming 99 slurs per 100,000 tweets. 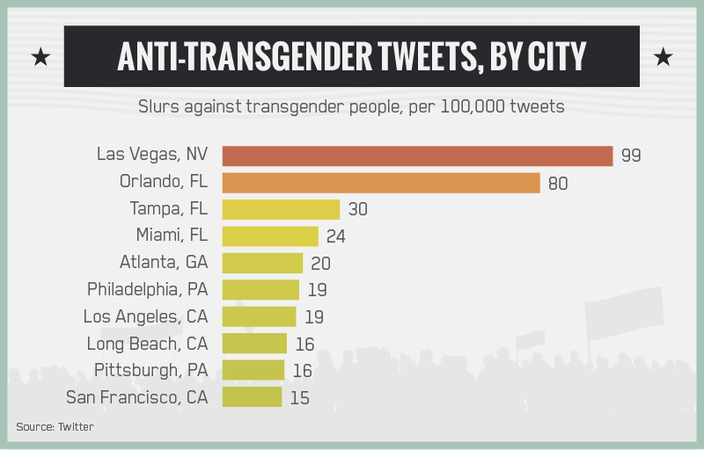 These cities had the most anti-transgender tweets from June 2014 to December 2015, according to the website Abodo.

In Philadelphia, several transgender people have been subject to deadly violence in the past few months.


Most recently, Maya Young, 25, was fatally stabbed in North Philadelphia. Two suspects have been arrested and face murder and conspiracy charges.

In January, a sign displayed at the annual Mummers Parade was condemned by many — including Mayor Jim Kenney — for mocking transgender people.

The entire Abodo study can be seen here.