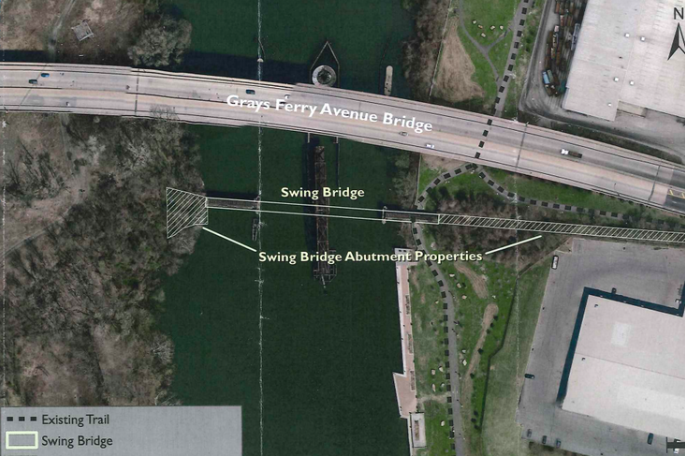 Philadelphia's portion of the popular Schuylkill River Trail will soon have a direct route for bikers and pedestrians to cross into the southwest section of the city.

After more than a year of planning, Philadelphia has reached an agreement with Conrail to receive the abandoned Schuylkill River Swing Bridge as a donation for an expansion of the urban trail, voted the best in the United States as recently as two years ago.

“It’s great to celebrate another major improvement to our already amazing Schuylkill River Trail system," Mayor Jim Kenney said in a statement. "This addition will increase access among communities and help all residents of Philadelphia remain healthy and active."

City officials said the bridge, a 226-foot-long structure seated on a central pivot, will be repurposed into a functional crossing that connects the Grays Ferry Crescent Trail to the Bartram's Mile section of the SRT, which opened on Earth Day earlier this year.

“We are thrilled Conrail’s Swing Bridge will once again serve as a central connection point for traversing the Schuylkill River," said Jonathan Broder, VP of corporate development at Conrail. "Instead of active train traffic, the bridge will serve our community by extending Philadelphia’s popular trail system and be known as Conrail Crossing."

Philadelphia estimates the cost of the project will be $12 million, with funding provided through a $3.2 million federal grant and $10 million from the state.

The Schuylkill River Swing Bridge was built in 1902 to enable the Philadelphia, Washington and Baltimore Railroad Company to transport heavy freight across the river. It was taken over by the Pennsylvania Railroad Company in 1918 and later by Conrail in 1976. It has remained locked in an open position since railroad operations ceased in 1984.

John Grady, president of the Philadelphia Industrial Development Corporation (PIDC), said the project is a model for the impact of public-private partnerships.

"The Conrail Crossing will not only enhance access for recreation, it will provide greater connection for the surrounding neighborhoods and bridge the innovation district to allow ideas and energy to flow across the river,” he said.

Officials said design work is already underway and construction is set to begin in 2018.