Rizzo's daughter: The play was great

The late former mayor's family was wary of how he would be portrayed on stage, but not anymore 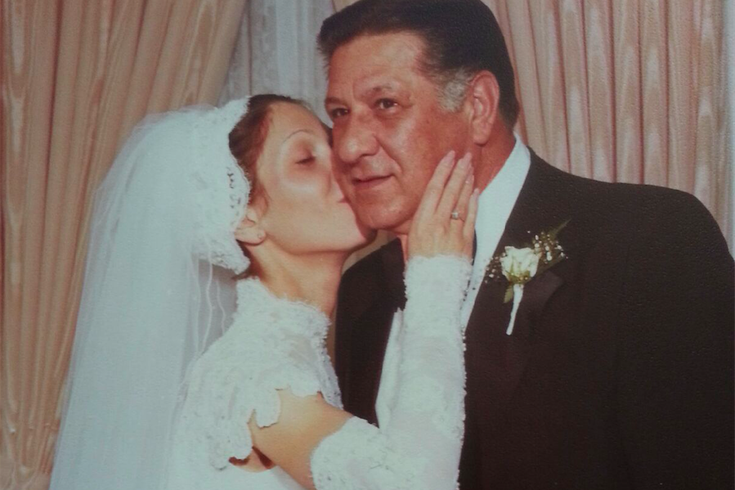 Joanna Mastronardo kisses her father, the former mayor of Philadelphia Frank Rizzo, on her wedding day.

Last week, the son and grandson of late Philadelphia Mayor Frank Rizzo weighed in on the Theatre Exile play "Rizzo," which has drawn great reviews from those who've seen it at Christ Church Neighborhood House in Old City.

After catching it on opening night, Frannie Rizzo – the late mayor's son and former city councilman – said it was "really good," though he could have done without much of the storyline's focus on racial matters that, to many, defined the mayor's time in the public eye.

For his part, grandson Joe Mastronardo worried about a liberal agenda interfering with the focus of the play itself but said he'd withhold total judgment until his mother Joanna saw it.

Well, that's exactly what Joanna did on Friday night.

Here's what she had to say about the performance:

"I went in with an open mind to see what it presented, and it was really good. They touched on his personality and how it influenced what he did and how he was trying to do what was best for the city. It wasn't politics; it was his personality. It was amazing, truly impressive, how six or seven actors took on all those roles. It was really well done.

"One thing I noticed that was really special is when I looked around the audience, I saw a lot of young faces. People in their late 20s to early 40s. That really interested me. Some of the people in the audience were learning about him for the first time.

"The actor wasn't quite as tall as my dad, but the body type fit," she said. "It was very nice. It was definitely worth the trip."