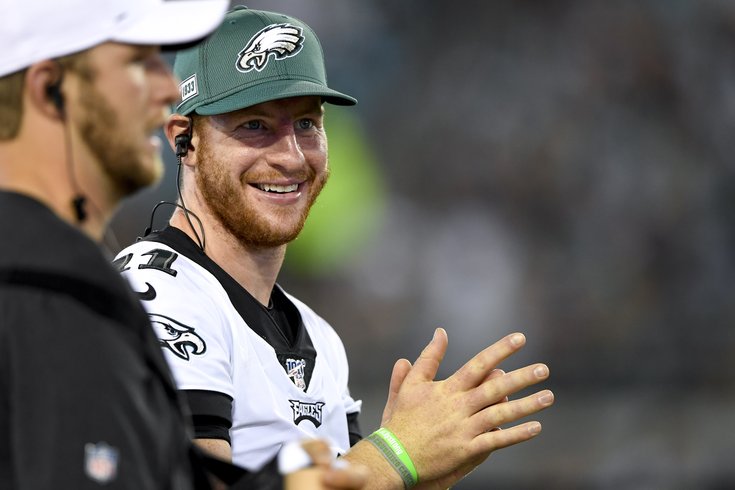 Philadelphia Eagles quarterback Carson Wentz is an immensely talented player, but after tearing his ACL and LCL in 2017, and suffering a fracture in his back in 2018, he has durability concerns. There. You probably don't need to read the rest of this post, but please do so I can feed my family. Thanks.

A poll of 55 NFL coaches and executives, from Mike Sando of The Athletic: 10th

A good chunk of voters think Wentz would be a 1 if knee and back injuries hadn’t forced his career to take a detour.

“He’s a 1,” an offensive coordinator said. “We played them; he made four to five throws I really did not think he could make. He has great confidence, great stature. Big arm. Competitive. He gets hit more than he should, but he played young and should grow out of that.”

Some dropped Wentz into the third tier this offseason simply because they weren’t sure he would recapture the form he showed before the knee injury.

“We have played him, and our head coach thinks the world of him, and I think he is a great player and a strong athlete,” a defensive coordinator said. “I just don’t know his ability to read it and have touch passes. He can throw hard balls in there, and he has a super-strong arm. I do not yet know if he has the touch and the feel to ascend.”

A GM said he would “give Wentz a 2 and hope” for better health. A QB coach noted that Wentz had been hurt at every level of football. A defensive coordinator said he thought the post-injury Wentz did not display the escapability that had differentiated him before.

“He is damn good and he can run, but he does not play with a calm to him yet,” a coach who studied the Eagles this offseason said. “He overreacts to things and is not smooth and poised like a guy who has done it a long time. He will get there.”

A personnel director used the term “Andrew Luck-ish” to describe a healthy Wentz.

An offensive coordinator noted that Wentz has benefited from a strong supporting cast. Quite a few voters thought Wentz could carry a team, but they didn’t think he had done it yet.

“Wentz just got paid, so if all of a sudden they are 7-9, it is going to be, wait a minute,” an evaluator said. “I hope this is not an RGIII situation, but because of the injuries, I think he needs to reconfigure how he plays.”

#JimmySays: Sando's survey of 55 NFL coaches and executives is by far the best piece on quarterback rankings, every single year.

Kurt Warner's top 10 quarterback list on NFL.com: Wentz did not make the cut

#JimmySays: The player I would quibble with the most on his appearance on the list over Wentz is Cam Newton.

Apparently the second-leading candidate to win MVP this year. Just to clarify when I had him at No. 3, I made that list up the year he was about to be the MVP of football. I probably made the list up – that original one – about two weeks before he tore his ACL. It was right around that time period. So he was absolutely, without a doubt, just kicking butt at that point.

Now, here’s the thing with Carson Wentz and why he’s No. 11. It’s really availability, is really the No. 1 reason he’s No. 11. The talent is top five talent. The talent to carry a team, make plays off schedule, scramble, run, throw on the run, stand in the pocket, he can do all of those things. I’ve made the comparison many times. He’s really, to me, he’s a little bit more physically gifted version of Andrew Luck. That’s how I look at Carson Wentz.

But, now, hey, when you hear about the things about the leadership, and how the team perceives him in the offseason, and of course the injury thing has to play into the rankings here and what he’s doing. I don’t know exactly what he is, or where his mind is at at this point.

#JimmySays: Simms says some very complimentary things about Wentz, notably that he's a "more physically gifted version of Andrew Luck." Obviously, however, Simms was swayed a bit by the story that was published here at PhillyVoice in regard to the way his teammates view him.

#JimmySays: Jared Goff made the cut over Wentz. Goff is not better than Wentz.

It was pretty obvious this season that he wasn't all the way back from his knee injury. When Wentz was healthy in 2017, he was the MVP front-runner.

#JimmySays: They assembled their list on the basis of how they believe NFL teams would draft the position if every player became available for the upcoming season. They had Dak Prescott 14th, just FYI.

#JimmySays: They had Wentz one spot above Kirk freaking Cousins, lol.

Wentz, a physical and athletic freak who got strong MVP consideration in his second season before his knee injury, would be ranked higher if not for concerns about his durability going into Year 4. He has a good chance to quickly change that narrative this season. The Eagles no longer have a good backup plan, and they are investing more in Wentz's playmakers and protection.

#JimmySays: I certainly don't disagree with the notion that Wentz needs to prove that he can stay upright, but I do wonder how exactly Andrew Luck avoids that same criticism.

CBS Sports' collectively ranked top 10 QBs by a group involving more than 10 writers and editors: Wentz did not make the cut

Before we move onto the list itself, it's worth noting that only one quarterback barely missed the cut: Eagles quarterback Carson Wentz.

#JimmySays: Again, assuming Wentz was left off for durability concerns, I'm not sure why they apply to him, but not Luck or Deshaun Watson.

His health is a major risk, so for the purposes of this exercise assume he's healthy. The last two seasons, he's been brilliant when he is. He's so good at creating plays on the move and he doesn't make a lot of mistakes.

JimmySays: This ranking was really an exercise in trying to figure out where Eli Manning landed among his peers. They had him at 14th, lol.