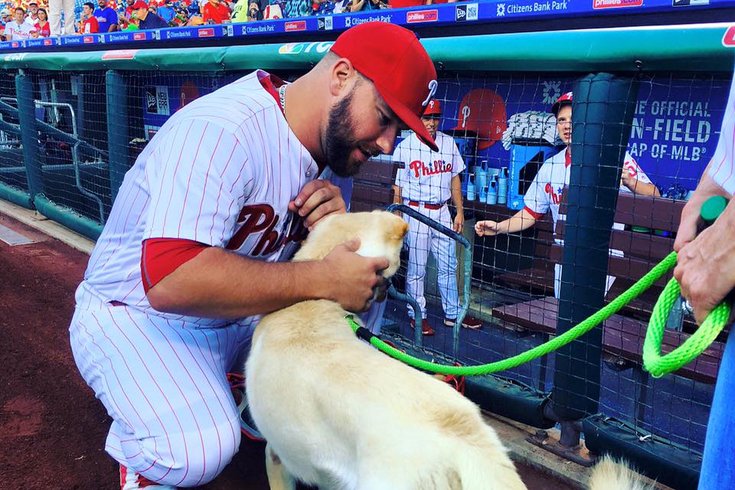 Phillies catcher Cameron Rupp pets a friend at Citizens Bank Park. He'll host a fundraiser for the PSPCA on July 27.

Cameron Rupp likes baseball, which makes sense since he’s a catcher for the Phillies.

Rupp also likes animals and country music, which helps explain why he – along with the Pennsylvania Society for the Prevention of Cruelty to Animals (PSPCA) – will host the first-annual “Ruppapalooza at the Pier” later this month.

Are you a baseball fan, animal advocate and/or country music lover? Well, the “baseball-themed evening benefiting the region’s animals” will take place at Morgan's Pier (221 North Columbus Boulevard) from 6 to 9 p.m. on Thursday, July 27.

There will be Phillies celebrity bartenders, an appearance by the Phanatic, adoptable dogs, raffles, games and other attractions to benefit the PSPCA.

Per the animal-welfare agency, Rupp will also host Tyler Reeve – a friend who just happens to be “one of Nashville’s hottest songwriters” – to play a short set.

“Animals and baseball are my passions and being able to combine the two has been a dream come true,” Rupp said.

“My goal is to make Ruppapalooza an annual event, in which we take on a wide variety of animal-related issues and hopefully figure out a way to make a significant difference,” he continued.

Tickets are on sale now ($35 general admission/$55 VIP) and available via the PSPCA website.