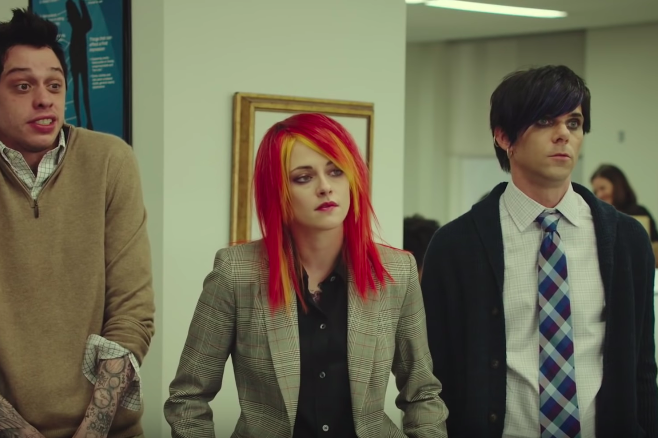 Kristen Stewart returned for her second hosting gig on "Saturday Night Live," and, well ... it wasn't the best. It's not exactly a secret that Stewart isn't the most comfortable performing live sketches. So, to say this was the weakest episode of the season so far is not an understatement.

While the lackluster performance was a little hard to get through at times, it wasn't all bad! The "Charlie's Angels" actress managed to hit the mark on her filmed sketches, naturally.

MORE:
Pennsylvania Gov. Tom Wolf weighs in on whether a hot dog is a sandwich

The "Duolingo for Kids" sketch wants to help people who are terrible at talking to kids — like Stewart, who said to a child, "You go to school, huh? That sucks. Uh, do you wear clothes to school?" Yikes. But don't worry, the app teaches you how to say, "Cool," and "I like your backpack," so you don't sound like such an awkward adult.

Stewart starred alongside Kyle Mooney, Mikey Day, and Pete Davidson in the Kickflip music video for "Corporate Nightmare" — basically a video made from the dreams of every former punk kid of the early 2000s. This Sum 41 meets Good Charlotte pop punk anthem is one giant "f*** you" to the corporate world — except for, you know, when you're actually doing a good job, getting recognized for it, and might get a promotion.

Philly did get a shout out on this week's Weekend Update … but for all the wrong reasons. Michael Che joked about the onslaught of boos President Donald Trump received this week — from Nationals' World Series game in Washington D.C. to an UFC fight in New York City. Che notes it's like he gets booed "everywhere he's ever lived." He adds, "Even Cosby can still play Philly." Yeah, uh, I don't know about that one, Che.