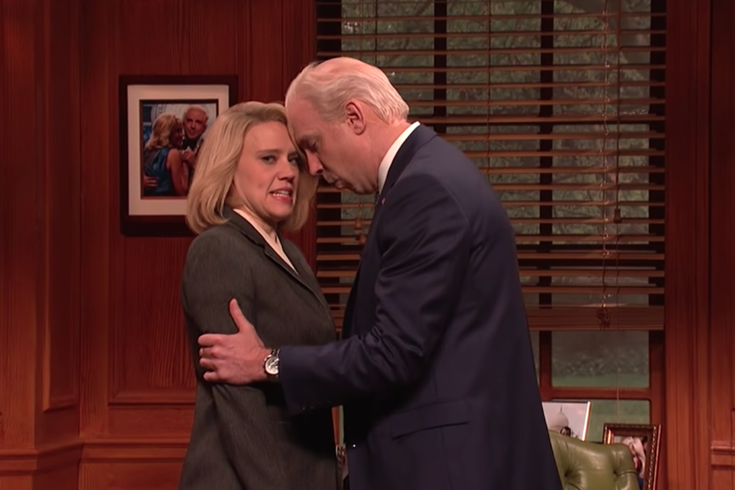 On the April 6 episode of "Saturday Night Live," the cold open and "Weekend Update" sketches featured some commentary on Joe Biden, who has been accused by multiple women of inappropriately touching.

The first episode of "Saturday Night Live" this month targeted former Vice President Joe Biden in more than one sketch.

Biden was recently in the news after four women came forward to accuse him of inappropriately touching them. All of the women say they experienced an instance where Biden made them uncomfortable with how he touched them.

This week he released an apology video on Twitter to address the issue, but only justified the "human connections" he makes — like touching shoulders, shaking hands, and hugging — as a way to show people he's listening to them.

In the April 6 episode of "SNL," — hosted by Kit Harrington with musical guest Sara Bareilles — Biden was targeted not once but *twice* for all of this.

The cold open, known for its biting political satire these days, featured Biden (Jason Sudeikis) in his campaign headquarters with concerned members of his team who called in a consultant (Kate McKinnon) to address Biden's compulsion to touch strangers.

"If you're gonna run in 2020, you have to change the way you interact with women," they say.

They also call in two female voters to evaluate if he crosses the line. Spoiler: He does.

Michael Che and Colin Jost laid into Biden during this week's "Update" segment.

"He looks like one of those uncles that call spring 'sundress time!' Che said.

They even called his personal apology video more of a creepy reenactment than an apology.

"Nothing puts women at ease like a man on a leather couch who has already taken off my tie," Jost said.