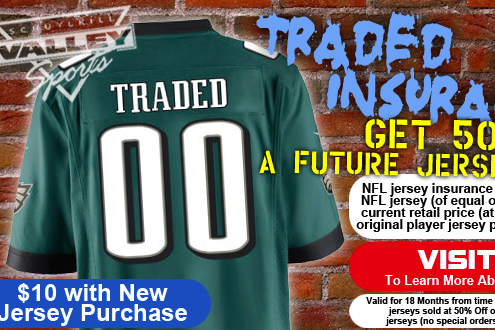 Shoppers at Schuylkill Valley Sports can now get insurance on purchases of Eagles jerseys to safeguard against trades.

The NFL is an especially fickle business with frequent roster shake-ups and changes in team philosophy, regardless of popular thinking. With Chip Kelly both coaching and controlling personnel, we've seen these tendencies go into hyperdrive, which presumably will last until the Eagles are serious contenders.

This can be a raw deal for fans.  Particularly for kids, star players exiting via trade or free agency is a tough thing to understand and accept.

Yes, you can now pay an extra $10 at the time of your purchase to insure half off the price of a new Eagles jersey if the original player is no longer with the team after 18 months.

Is that enough time? Maybe, maybe not. The store won't be taking the original jerseys as returns, so fans will reserve the right to keep them for vintage use. As the franchise leading rusher, Shady is probably a keeper.

Otherwise, the safest bet is to just stick with Dawkins, White, Cunningham, or Westbrook for a while. And don't forget, number 5 will always love you.