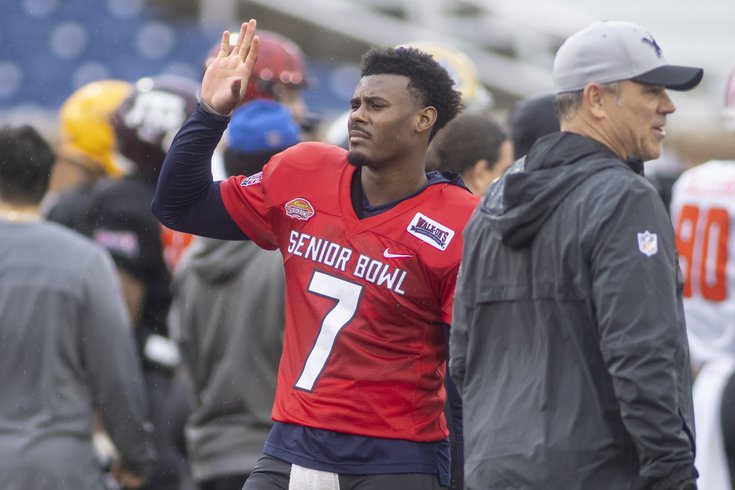 Malik Willis waves to Howie Roseman. Or maybe he was just shielding the sun from his eyes. Whatever.

Day 2 of practices at the Senior Bowl was a miserable, cold and rainy day, but since I'm a football guy, I watched the first practice before leaving to catch my flight home. Here's what I saw.

• We noted yesterday that the defensive linemen mostly destroyed the offensive linemen on Day 1. The OL was better on Day 2, but the standout of Senior Bowl practices in general has been Oklahoma's Perrion Winfrey, who was unblockable on Wednesday, absolutely living in the backfield during team drills both on run plays and pass plays. Here's a forced fumble and recovery by Winfrey on a run play.

Perrion Winfrey comes from the other side of the line, penetrates and rips the ball from the ball carrier. pic.twitter.com/uw034s2Xm7

Winfrey is a JUCO transfer who flashed in his first season at Oklahoma in 2020, but in 2021 he added a little production to go along with his obvious athletic traits. He had 11 tackles for loss and 5.5 sacks in 11 games. He's a bit of a late bloomer who I originally thought might take some time in the NFL to reach his potential. After watching him against good competition in Mobile, I'm convinced that he'll play immediately in the NFL.

Winfrey has helped his stock perhaps more than any other player here, and I'll bet you'll start hearing him getting talked about as a first-round pick going forward.

• Minnesota edge rusher Boye Mafe had a few nice reps against Bernhard Raimann, an OT with some first-round buzz. Mafe is probably a Day 3 guy who had a good-not-great career at Minnesota, but who has physical gifts. He came in at No. 17 on Brice Feldman's "freaks" list this past offseason.

• One of the consensus top performers so far has been Florida State edge rusher Jermaine Johnson. He has shown a nice blend of quickness and power. Here he is making an OT whiff during 1-on-1's on an inside move.

He has appeared as one of the Eagles' first-round picks in some mock drafts.

• An offensive lineman who I'd previously never heard of who is now on my radar is Tennessee-Chattanooga iOL Cole Strange. I've watched as UConn NT Travis Jones has overpowered interior linemen in 1-on-1's, but Strange did the best job of the bunch at holding his ground. He has center/guard experience and would make sense as a versatile Day 3 guy.

• I've been kind of disappointed with what I had seen from mountainous Australian 6'9, 387-pound OT Daniel Faalele. He has struggled with speed, and even got run over on one occasion.

• One of the potential first-round offensive linemen here is Northern Iowa's Trevor Penning. This guy has some Jon Runyan in him. I can't say I've ever seen an offensive lineman purposely shove a defensive lineman in the goal post after a rep was over.

• The Eagles could really use a big receiver, so guys like Cincinnati's Alec Pierce and North Dakota State's Christian Watson make sense for them. But they could also use a shifty slot receiver, like Memphis' Calvin Austin, who racked up 137 catches for 2202 yards and 19 receiving TDs over the last two years, while also serving as a big play threat both as a runner and punt returner.

Austin showed some juice this week. For example:

• Apparently, there's some steam picking up about Howie Roseman paying special attention to Liberty QB Malik Willis during practices. Meh. I would periodically try to locate Howie and Nick Sirianni out of curiosity to see what they were watching, and, well, they watched a lot of things.

If Roseman paid special attention to Willis (I'm not saying he didn't), I missed it. But it's also not surprising if he did. I paid special attention to Willis, too. So did must people in attendance. Honestly, if you could pinpoint one player at this Senior Bowl who is sort of equal parts intriguing and mysterious, it's Willis, who played at a smaller school and has dynamic, fun traits.

As we mentioned yesterday, as a runner, he reminds a little of... Jalen Hurts! He's similarly sized, and he can run through tacklers in addition to running by them, though his speed isn't on the same level, as say, Lamar Jackson or Mike Vick.

As a passer, Willis can make throws that Hurts cannot, at least on a consistent basis. Willis has more arm strength and better accuracy, particularly while on the run. And yet, like Hurts, Willis' accuracy is very much a work in progress. In my opinion, there's a significant difference in passing ability between the two players. Take a moment to watch some highlights:


Fun, right? If Willis is sitting there at pick 15, the Eagles have to strongly consider taking him because of his high ceiling. He could sit for a year or so behind Hurts while he gets acclimated to the speed of the NFL, and then who knows what can happen. But it's not like Howie was stalking the kid all day.