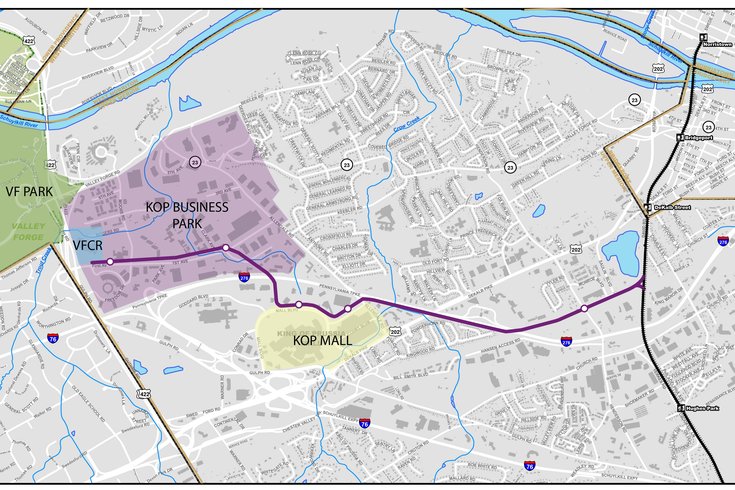 This route has been recommended by SEPTA as the preferred choice for extending the Norristown High Speed Line into King of Prussia.

Officials have chosen their recommended route for an extension of the Norristown High Speed Line into King of Prussia.

SEPTA announced Friday its preferred choice among a list of alternatives that would bring the new line mostly along the Pennsylvania Turnpike, making two stops at the King of Prussia Mall and another two at the business park next door.

The transportation agency will hold public meetings to gather community input on the recommendation, which does not represent a final decision on the future of the project.

The route was chosen over a number of alternate routes, including one that would have went along Route 202.

Some Upper Merion residents oppose the project, signing an online petition that claims the project will create noise pollution, safety hazards and other issues.

Those behind the petition also suggest SEPTA has been difficult to communicate with regarding the project, but officials have said they've kept an open line of dialogue, primarily through public meetings.

The extension is expected to cost around $1.1 billion. A study conducted for the Economy League of Greater Philadelphia said the project would create jobs and increase real estate values in the King of Prussia area.

If the project goes according to schedule, construction could begin by 2020 and the line could be operational by 2023.