SEPTA's Route 23: A window on Philadelphia

As SEPTA mulls severing its busiest bus line, we ride from South Philly to Chestnut Hill 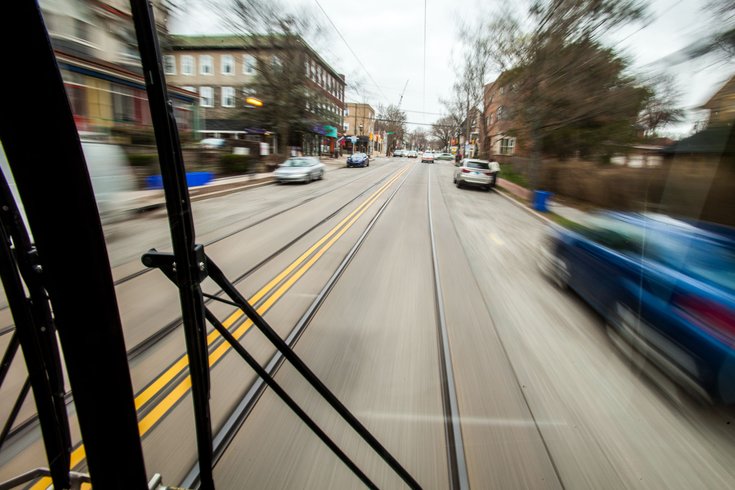 Hardly anyone rides SEPTA’s Route 23 bus from its origin in deepest South Philly, on Oregon Avenue, to its terminus at the top of Chestnut Hill. After all, it takes about 90 minutes from end-to-end, roughly as long as a trip to New York City.

“It goes through every type of neighborhood,” the driver says, as the bus idles on Broad Street, waiting to begin its long journey to Northwest Philadelphia.

That’s the reason professors at Temple and the University of Pennsylvania have assigned their students to ride the 13.8-mile route as a means to familiarize themselves with the city. This academic exercise stretches back decades, to at least the 1960s, long before the line transitioned from trolley cars to buses in 1992, when the 23 was the longest streetcar line in the world.

No matter the vehicle, Route 23 wends its way through the densely-packed rowhomes of working class South Philly, the stately townhomes and office buildings of Center City, up through the heart of impoverished North Philly, historic but divested Germantown, the integrated middle-class neighborhood of West Mt. Airy, to the wealthy enclave of Chestnut Hill. 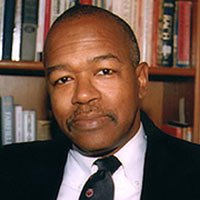 “The trolley and the 23 was an inspiration to me as I tried to make sense of Philadelphia,” says Elijah Anderson, left, professor of sociology at Yale, formerly at Penn, and author of "Code of the Street" and the "Cosmopolitan Canopy."

“It’s a real tool for teaching, especially for students who are new to the city," he says."They get a feel for the diversity of the neighborhoods along the way. It’s a perfect people-watching venue – the trolley basically allowed you to get close to the subject matter. There are few cities in the country with such a line.”

Route 23 is SEPTA’s busiest surface route, with 254 weekday trips carrying an average of 22,801 passengers. Among City Transit lines, it lags only the Market-Frankford and Broad Street Lines in ridership. It is also one of the worst performers in terms of scheduled service: its on-time rate is a mere 64 percent. (Only five lines perform worse.) 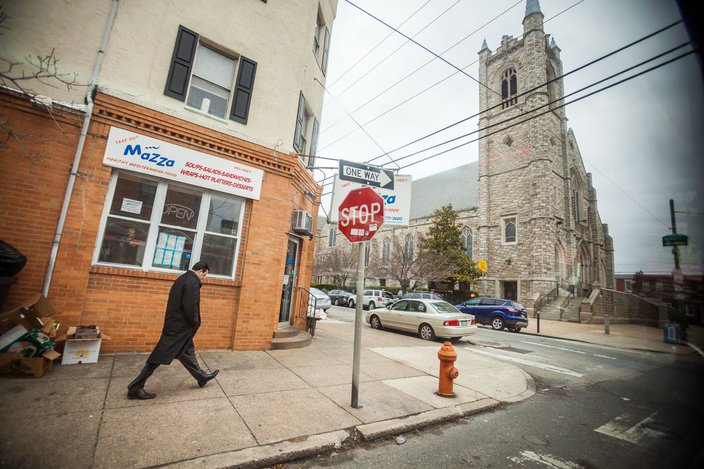 Out the window of the Route 23 bus, at 11th and Jackson streets, as it heads north on its 13.8-mile trip from South Philadelphia to Chestnut Hill. (Thom Carroll / PhillyVoice)

Last month, SEPTA announced a plan to address these delays by dividing the 23 in two, with half of the route rechristened as the 45 – the stretch from Oregon Avenue to Center City to the Eraserhood – while the northern portion continues as the 23.

SEPTA representatives say they’ve heard no substantial opposition to the plan. Most passengers use the bus to travel between adjacent neighborhoods or to Center City, not to travel across it. The length of the route makes riders in Germantown susceptible to traffic incidents in the narrow streets of South Philly, or puts a rider trying to get from Temple University to downtown at the mercy of a car accident in Mt. Airy. SEPTA officials hope that the shorter routes will reduce gaps in service.

AN EDUCATION ON WHEELS

As SEPTA considers severing the 23, it is worth experiencing why Anderson and others like him have found the route such a useful teaching aid about Philadelphia and its neighborhoods.

Hopping on a waiting Route 23 bus at Broad and Oregon, the bus lumbers into the narrow streets of South Philadelphia. There are no vacant houses or storefronts, the corner bars and barber shops still anchor their blocks. The passengers are mostly white, with a few Hispanic and Asian riders, too. 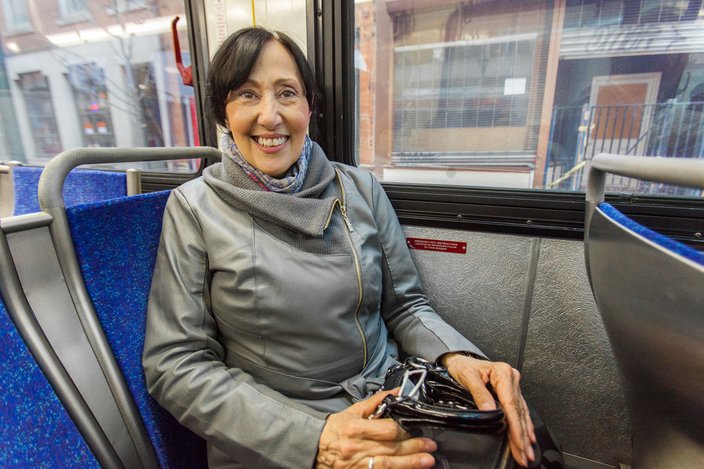 Rita Ann of South Philadelphia rides the 23 every workday to Center City - and has for 15 years. She remembers when trolleys still ran on the line. "It was a lot slower," she says, "but the windows would open, you could even smoke. It was nostalgic.” (Thom Carroll / PhillyVoice)

“I ride it uptown every day for work for the last 15 years,” says Rita Ann, a lifelong resident of South Philly. She says she has never ridden the 23 north beyond Center City, but distinctly recalls when trolleys ran along the route. “It was a lot slower, but the windows would open, you could even smoke. It was nostalgic.”

As the 23 approaches Market, the streets grow broader, and the bus is further away from the houses which grow taller and grander. The storefronts no longer cater to working-class tastes and the suit-and-tie crowd is evident. In Center City almost everyone gets off and the fresh crop of passengers wanting to head north is almost entirely African American. 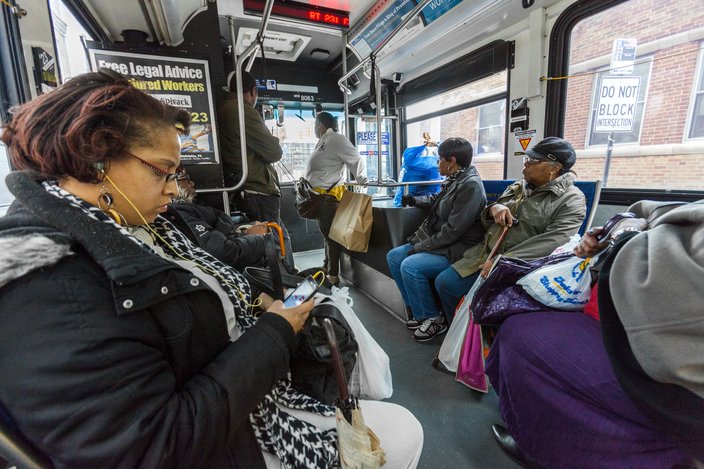 Just north of Center City, the 23 begins to get much more crowded. (Thom Carroll / PhillyVoice)

After passing through Chinatown, and the former industrial district that used to be home to film director David Lynch, and the Hope VI-restored Richard Allen public housing neighborhood, the 23 skirts the eastern edge of Temple University’s campus. It’s right about here that the 23 bus picks up Germantown Avenue, the lengthy boulevard it will trace all the way to the city’s edge.

The long-depressed blocks of North Philadelphia follow, the rows lined with boarded-up homes and vacant lots, and the abandoned hulks of long defunct factories. In these neighborhoods, the 23 gets crowded as it offers an arterial transit service far from the two subway lines. 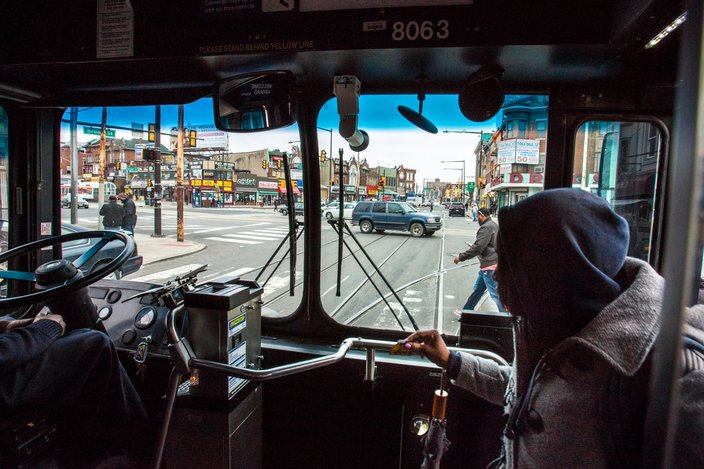 A bustling crowd waits for the 23 at the intersection of Germantown Avenue, Erie Avenue and Broad Street. (Thom Carroll / PhillyVoice)

At the joining of Erie, Germantown, and Broad, a bustling North Philadelphia shopping district, there is another huge changeover in passengers. The Black and Nobel bookstore holds court on one side of the intersection — a stark confirmation that “We Ship To Prisons” on the side of the building in huge white on black lettering — while a Church’s Chicken with an absurdly large sign holds down the other side.

Continuing up Germantown Avenue to the northwest, the looming Gothic Revival spires of Simon Gratz High School are clearly visible in the distance. There's even named a restaurant after historic line: the Route 23 Café.

'I LIKED THE TROLLEY BETTER'

At this point there are no open seats on the 23 as it rolls into the formerly upper middle class neighborhoods of old Germantown. Gorgeous houses and stately old buildings, many bearing historic preservation signage, line the avenue interspersed with hoagie shops and check cashing joints. Many restaurants cater to the devout local population of African American Muslims, including the now defunct Mecca Pizza. The Johnson House, site of Philly’s only extant stop on the Underground Railroad; the Germantown White House, where George Washington escaped from the central city in what was then countryside; Germantown Friends, a Quaker K-12 school that dates back to 1845.

But many are vacant, like the old town hall, or in obvious disrepair, like Trinity Lutheran Church.

It is here that Margrete, who asked that her last name not be used, gets on. She lives in Germantown but takes the 23 bus twice a week to visit friends in Chestnut Hill. She soberly discusses how often the bus is on time and the constricting press of the crowds of passengers. But she brightens at the mention of the old trolleys.

“When I lived in North Philly I used to take the trolley,” she remembers, smiling. “That was years ago. They were green and beige and the fare was only 23 cents. I liked the trolley better, although it took longer.” (When trolleys rumbled along the 23, an end-to-end ride took more than three hours; the bus takes about half of that time.) 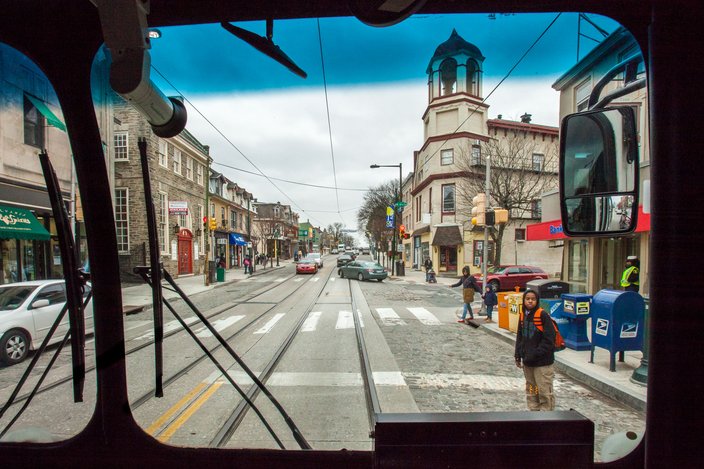 In Germantown the racial demographics begin to diversify and, soon, the 23 arrives in West Mt. Airy. This middle class neighborhood – one of the oldest integrated communities in America – has seen a storefront revitalization in recent years, as restaurants have begun sprouting on the once-listless main street. Then comes the terminus, Chestnut Hill, with its shops of olive oil, antiques and fine cheese.

One of the history professors who assigned students to ride the 23 route now lives in Chestnut Hill, near the end of the line. 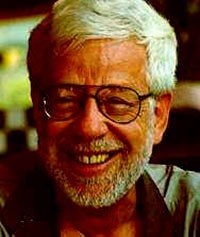 “Other people in the Urban Studies department were doing this when I got to Temple in 1971,” says Arthur Schmidt, left, now retired from the history department.

“It was very useful because it gave students a chance to see the income and racial segregation that exists in the city," he said. "You can see it correlates a bit with the different sorts of housing styles and eras that things were built in. You can still see considerable evidence of the deterioration of the manufacturing.”

SEPTA representatives assert that the new divided route will not foreclose the possibility of returning the 23 to the trolleys that ran the route when Schmidt and Anderson were assigning it. But they do not seem to think it would be a practical choice.

And as nostalgic as some riders are for the old trolley cars, their attitudes may best be summed up by Nayla Akres, a rider from South Philly.

Asked what she would prefer for the future of Route 23, she says,“Whatever’s faster."