Collaboration with Stephen Starr to open by end of 2016 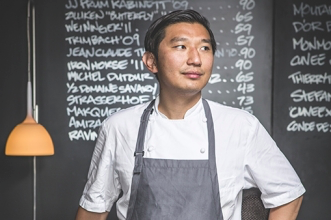 Fans of Peter Serpico's namesake restaurant on South Street, a New American-Asian collaboration with Stephen Starr, can soon look forward to a new Korean restaurant in Rittenhouse at the former Sansom Street location of Il Pittore.

According to Eater Philly, Serpico and his Korean-American wife will open their yet-to-be-named Center City restaurant by the end of 2016, with a focus on the cuisine's traditional lineup of appetizers, entrees and desserts.

At the new Rittenhouse restaurant, patrons can expect more classic soups and stews than the exotic seafood dishes that mark other Korean restaurants like Olney's Seorabol.

In the run-up to the restaurant's opening, Serpico will reportedly renovate the first floor of the space at 2025 Sansom Street, removing a chef's counter to expand the bar to 35 seats. Upstairs seating will accommodate 65 people.

In the meantime, if you have a Thanksgiving-sized meal to prepare at home in the near future, you can take some advice from Serpico, Di Bruno Bros. Emilio Mignucci, Le Virtu's Joe Cicala, and Percy St. Barbecue's Erin O'Shea.