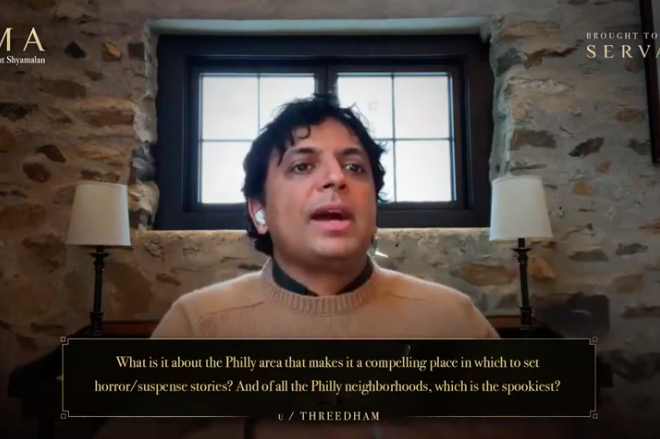 M. Night Shyamalan's gripping Apple TV series "Servant" is the latest in a long line of projects the director has shot in the Philadelphia region.

Most of the show, now in its second season, centers on a spooky home on Spruce Street where a struggling couple grapples with the mysterious and traumatic death of their infant. A nanny brought in to watch over their therapeutic "reborn doll" possesses cult-like powers that bring the child back to life, but not without an unsettling danger wrapped in Shyamalan's darkest shades of humor and haunting beauty.

On Wednesday, Shyamalan logged onto Reddit to participate in an Ask Me Anything session, responding to questions in a video livestream.

Many of the director's shining moments, from Callow Hill's St. Augustine's Church in "The Sixth Sense" to the Philadelphia Zoo in "Split," have paid homage to the city he calls home. Naturally, he was asked about the role Philadelphia plays in his filmmaking. He gave a lengthy response about what the city means to him:

Philadelphia, as you guys probably know, if you follow me, I love Philadelphia. I think it's the best city in the country, one of the most beautiful places to live. It's really grown over the past 15-20 years into this beautiful place. Young professionals live here, very diverse. It has an unbelievable amount of higher education. The places that you can shoot here, you can do a period piece, you can do a sci-fi piece. It's just all of this span of anything I can make up in my head, I can do it here. In fact, 'Old' is the first movie I shot in a long, long time that wasn't based in Philadelphia and that I couldn't shoot in Philadelphia. And I remember when I decided to make that movie, it was a big decision of, 'Hey we're not going to shoot in Philadelphia for this.' ...

For 'Servant,' placing it right in the center of the city on Spruce Street was a big deal. It makes it feel real and close to my heart. All the ideas of what it's like to walk through the city, or what it's like to live on that street, are from people that I know. There's an authenticity to it. I feel very lucky to have gotten the opportunity to make movies where I love to live. That's not true for a lot of people, certainly not true for artists, that you get to make your art where your love and where your strength is, where your emotion is...That's usually a sacrifice that you have to make as an artist, 'Well I can't be with my family, I can't be where I want to be. I have to go where the jobs are.' So many people in so many fields have to make that decision. I'm super, super lucky that I was able to stay here.

Shyamalan confirmed that Apple TV has signed on for a third season of "Servant," which is set to begin filming in the near future. During the Super Bowl, he released a trailer for his upcoming film, "Old," which follows a family vacation at a beach that rapidly accelerates the aging process.

The transition to storytelling for TV has been a productive endeavor for Shyamalan, who said it has helped him refine his craft as a movie director and vice versa. He hopes that his relationship with Apple TV will continue:

When talking about television or doing some long form storytelling, I kept saying to the people in my team that I would love to help be a part of defining some place. The way David Fincher did for Netflix. When I think of Netflix, the emotions and colors that I think, even today, is so colored by what David did with 'House of Cards.' So if I could help be a part of defining something for somebody, that would be really exciting, and to grow with somebody. I don't mind being the underdog, and I don't mind learning together about how to succeed. In fact, that's super fun.

I used to say, 'If Apple ever did something, that's a company I really respect. This is something I would say five or six years ago. When 'Servant' came along, we were going to go out to the marketplace and Apple was just deciding to go into this place of streaming. We met all these wonderful organizations and many of them wanted to make 'Servant' ... The day we went to the Apple meeting, I got out of the car and said, 'Please let this go well, this is the one that I wanted to go well.' And they were so lovely and gracious, and said wonderful things about my previous storytelling and about these (three) scripts that we showed them. And when I walked out to the parking lot, I turned to my agent and I said, 'That's it, that's where we need to be.'

Viewership for 'Servant' is way up from Season 1 to Season 2, more than doubling the audience that saw the beginning of the first season when it premiered in early 2020.

Watch the full AMA session with Shyamalan below.