Film production is set to finish later this month, but a release date is unknown at the time 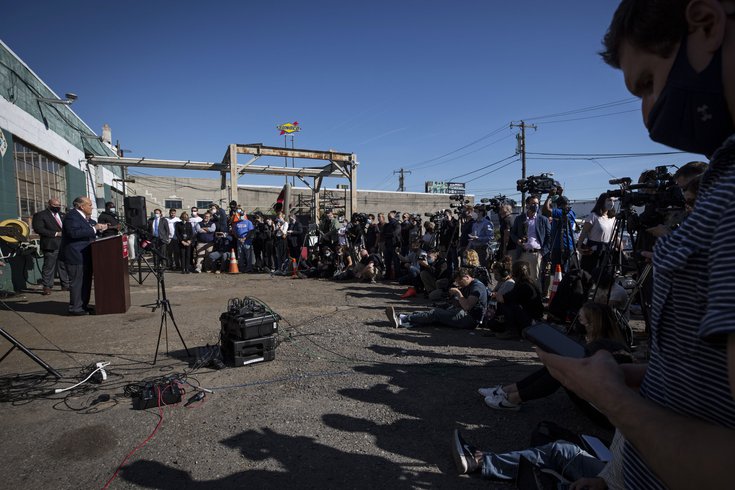 'Four Seasons Total Documentary' will tell the story of how the Philly landscaping company came to host the infamous Trump campaign press conference in November.

Philadelphia's own Four Seasons Total Landscaping will be the subject of a forthcoming documentary that will tell the story of how the company came to host the infamous Trump campaign press conference this past November.

The film project, titled "Four Seasons Total Documentary," is set to finish production later this month. A release date for the documentary is unknown at the time.

The documentary "will give a firsthand account of the rollercoaster journey that one well-meaning small business in Philadelphia went through when they agreed to host a political press conference in the most hard-fought American election in recent history."

Four Seasons Total Landscaping owner Marie Savino and sales director Sean Middleton will be featured in the documentary and tell the story of how the company has become so famous over the last three months.

The documentary, which will have "an apolitical and feel-good tone," is directed by filmmaker Christopher Stoudt.

"It’s an honor and privilege to be able to help tell a story that the world has been waiting months to hear," Stoudt said. "After such a hard year, everyone needed a moment to laugh. Little did we know it would come from a press conference that took place across the street from a crematorium (down the road from a sex shop). This film is a chance to wipe the slate clean, not just for Four Seasons Total Landscaping, but for the entire country.”

"We are so excited to be working with Christopher on Four Seasons Total Documentary," Stuart and Zipper said. "His extraordinary access and unique vision for this film are really going to surprise audiences and defy expectations. We can’t wait to share it with the world.”

The Northeast Philly landscaping company earned its claim to fame when former President Donald Trump's attorney, Rudy Giuliani, held a bizarre press conference in the company's parking lot as President Joe Biden was declared the winner of the 2020 presidential election.

Trump had tweeted the press conference's location, leading many people — including some reporters — to incorrectly believe that he had mistaken Four Seasons Total Landscaping with the Four Seasons Hotel in Center City. But Trump had indeed tweeted the correct location.

The landscaping company was also at the center of Fiverr's Super Bowl commercial, in which they poked fun at the infamous Trump campaign press conference.

Four Seasons Total Landscaping is located in an industrial area off I-95 just north of the Tacony-Palmyra Bridge in Philly.