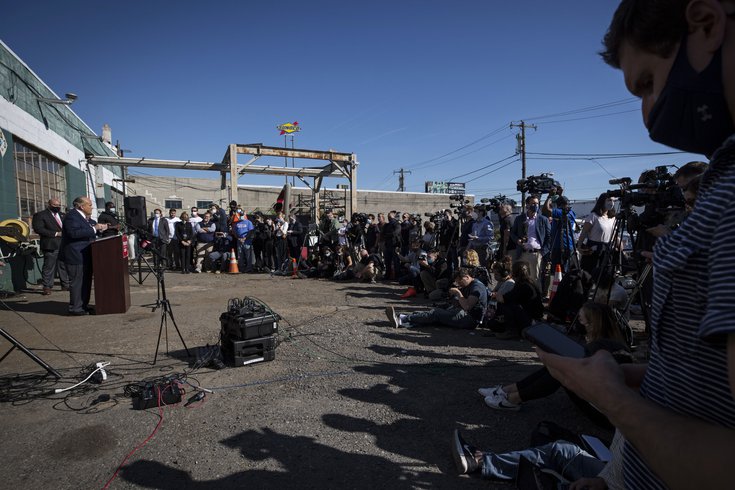 Rudy Giuliani speaks at press conference held Saturday in the parking lot of Four Seasons Total Landscaping in Northeast Philadelphia. The company is selling a hoodie, T-shirts and stickers in the aftermath of the infamous event.

Four Seasons Total Landscaping is now capitalizing on the fame it gained in serving as the drab backdrop for a Trump campaign press conference shortly after Joe Biden was declared the winner of the 2020 presidential election.

The Philadelphia landscaping company, located off I-95 just north of the Tacony-Palmyra Bridge, is selling a variety of merchandise. There are a hoodie, T-shirts and stickers available on its website, including one sticker that reads "Make America Rake Again" and "Lawn and Order!"

Established in 1992, the Holmesburg-based company describes itself as a "family-owned small business owned by life long Philadelphians." It specializes in ground maintenance, specialty landscaping services and snow removal.

Four Seasons Total Landscaping earned its claim to fame after Trump tweeted that his campaign would be holding a press conference there late Saturday morning.

It led to many people, including some journalists, to incorrectly believe the press conference was actually being held at the Four Seasons Hotel in Center City. But Trump had tweeted the correct location and the hotel even had to issue a statement to clarify any confusion.

Instead of arriving to a high-end hotel downtown, reporters found themselves at an industrial area that includes a nearby crematorium and an adult bookstore.

Giuliani made his remarks as media outlets began projecting Biden as the President-elect.

"We were honored to be asked to host a press conference at our facility," the company wrote. "We thank all of those that have shown support for our business and while we understand the negative comments, it saddens us that we have received such harsh judgment.

"Our team at Four Seasons would have proudly hosted any presidential candidate’s campaign at our business. We strongly believe in America and in democracy. We hope that our fellow Americans can join together and support all local small businesses during this time."

Sean Middleton, the company’s director of sales, told the Washington Post that he was not aware of any connection between the Trump campaign and the landscaping company.

"I have no idea why [the campaign] wanted to do it here," Middleton said. "I don’t know how the government works. Maybe they saw on satellite images that we have a big back lot and proximity to [Interstate] 95?"

Nevertheless, social media piled on the Trump campaign and the landscaping company with plenty of jokes afterward.

Look, the founders were very clear on this. If there’s *any* doubt whatsoever, the head of Four Seasons Landscaping Services in Philly, PA flips a coin, and Kanye calls it.


Four Seasons Total Landscaping, near the adult book store, across from the cremation center. Got it.


I mean, is is too late to spring criminal mastermind Nicky Scarfo Jr from prison to get him a role in the Four Seasons Total Landscaping sitch? He was born for it