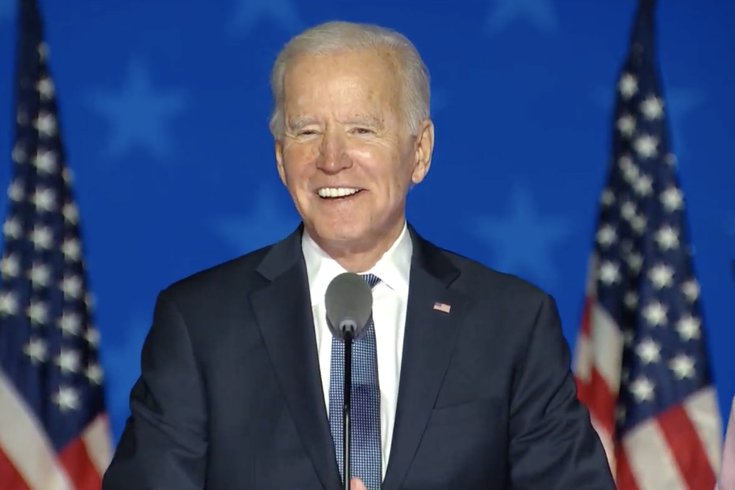 With Joe Biden projected to win Pennsylvania, the Associated Press has declared him the winner of the 2020 presidential election over incumbent Donald Trump.

The 2020 presidential election has been called for Democratic challenger Joe Biden, who eclipsed the mark of 270 electoral votes late Thursday night with a victory in Pennsylvania, the Associated Press reported.

Donald Trump is now the first presidential incumbent to lose a U.S. election since George H.W. Bush was defeated by Bill Clinton in 1992.

Biden's victory in Pennsylvania came after five grueling days of vote counting narrowed to a handful of battleground states with razor-thin margins. The tabulations remain ongoing in Arizona, Georgia and North Carolina. Alaska's vote also remains undecided, but is expected to go to Trump.

The AP has projected Arizona for Biden, though many other news organizations have not yet projected the state. Based on the AP's projections, Biden now has 290 electoral votes, having also captured Nevada after Pennsylvania, to Trump's 214.

Biden is expected to deliver a victory speech at 8 p.m. Saturday. In a tweet, Biden pledged to work for all Americans, regardless whether they supported him.

America, I’m honored that you have chosen me to lead our great country.

The work ahead of us will be hard, but I promise you this: I will be a President for all Americans — whether you voted for me or not.

I will keep the faith that you have placed in me. pic.twitter.com/moA9qhmjn8

The former vice president and longtime Delaware senator was propelled to victory by the slow and steady count of mail-in ballots, which overwhelmingly delivered on the anticipated "blue wave" in an unprecedented pandemic election.

Trump's Republican base turned out to the polls in impressive numbers across the country, giving him large leads on election night that slowly gave way to an avalanche of Democratic mail-in votes.

Biden, 77, set a presidential record for the popular vote, securing more than 74.8 million votes to Trump's 70.5 million. He flipped multiple states Trump had won in 2016, from Michigan and Wisconsin to Pennsylvania, and may still come out on top in others that remain too close to call.

Trump gained more votes than he did when he beat Hillary Clinton four years ago.

Sen. Kamala Harris will become the first woman and person of color to serve as vice president when she is sworn into office in January. Harris, of California, tweeted that the election was about the "soul of America."

This election is about so much more than @JoeBiden or me. It’s about the soul of America and our willingness to fight for it. We have a lot of work ahead of us. Let’s get started.pic.twitter.com/Bb9JZpggLN

The victory comes as Trump has cast doubt on the entire democratic process.

Trump declined to concede Saturday, instead issuing a statement saying the election was "far from over." He pledged a legal fight "that could determine the ultimate victor."

"Beginning Monday, our campaign will start prosecuting our case in court to ensure election laws are fully upheld and the rightful winner is seated," Trump said. "The American people are entitled to an honest election: that means counting all legal ballots, and not counting any illegal ballots. This is the only way to ensure the public has full confidence in our election."

Rudy Giuliani, Trump's personal lawyer, spoke about ongoing lawsuits filed in Philadelphia, but did not comment on the projections.

"I know this city has a sad history of voter fraud," Giuliani said. "I'm not attacking the people of Philadelphia. I'm attacking a decrepit Democratic machine which has a lot of other reasons to be attacked."

The legal fight is no surprise. On Thursday, Trump had vowed a massive legal challenge during a 17-minute press conference at the White House. Still, Trump's myriad claims of voter fraud remain unsubstantiated.

It was the first time the president appeared publicly since he had effectively declared himself the winner in the early morning hours after election night, before millions of legitimate votes had been counted.

Trump accused Democrats of widespread fraud, insisting that "legal votes" would support his re-election, while fraudulent votes for Biden were responsible for his advances across the electoral map.

"We think there's going to be a lot of litigation because we have so much evidence, so much proof and it's going to end up perhaps at the highest court in the land," Trump claimed.

The president provided no concrete proof of fraud or corruption. He declined to answer any questions from reporters and cast aspersions at the media and tech companies, such as Twitter and Facebook, that have flagged his social media activity as unsubstantiated and misleading.

The Trump campaign had already filed lawsuits in multiple states and demanded recounts, setting the stage for a tumultuous few months before Biden's inauguration with Harris in January.

Biden may take the White House with a Republican-controlled Senate, where Democrats failed to capture a majority they believed was viable. Two runoff races in Georgia will play a determining factor.

During a speech earlier Thursday afternoon, Biden said his campaign had "no doubt" he would defeat Trump. He encouraged Americans to remain calm through the completion of the vote count and to have faith in the nation's future amid a pandemic that has claimed more than 240,000 American lives.

"In America, the vote is sacred. It's how people in this nation express their will," Biden said. "And it is the will of the voters, not anything else, that chooses the president of the United States of America."