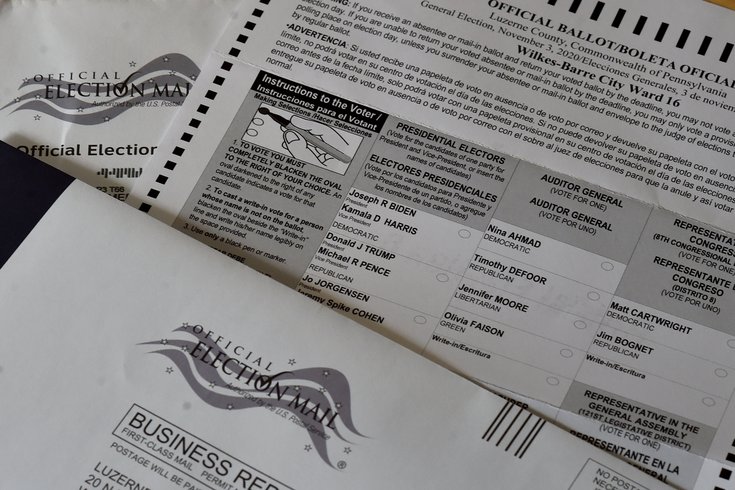 Any ballot postmarked by Election Day and received by 5 p.m. on Friday can be counted in Pennsylvania, the U.S. Supreme Court ruled last month.

President Donald Trump's attempt to stop the tallying of mail-in ballots in Philly has been stopped by a federal judge as former Vice President Joe Biden continues to cut into Republican incumbent's lead across the commonwealth.

Judge Paul S. Diamond denied the Trump campaign's request during a hearing on Thursday evening, according to the Washington Post.

Instead, Diamond called for an agreement to be made between both parties over the number of people who can observe the counting process. He said that Democrats and Republicans should be permitted no more than 60 observers to monitor the process of tallying ballots.

While Trump's campaign initially alleged that none of its observers were allowed to watch the process, it reportedly admitted during the hearing that there were official poll monitors witnessing the counting of ballots at the Pennsylvania Convention Center.

The Trump campaign had at least 34 observers at the convention center on Thursday to witness the counting process, the Philadelphia City Commissioners said. City officials also allowed monitors to stand six feet away from ballot workers after they were previously positioned 10 feet away.

“The Board of Elections will oppose efforts to slow down the ongoing count in court and will continue to treat all parties equally," the city commissioners said in a statement. "The Board has been completely transparent in its election process and the Trump campaign has had certified canvas observers in the Convention Center to view the counting operation all day long today as it has since the pre-canvas began on Tuesday at 7:00 a.m.”

The Trump campaign announced Wednesday afternoon that it was filing a lawsuit demanding greater access for campaign observers at locations where ballots are counted. The campaign filed similar lawsuits in Michigan and Georgia on Wednesday, as well as in Nevada on Thursday.

However, both legal challenges in Michigan and Georgia were dismissed on Thursday.

The campaign was "suing to stop Democrat election officials from hiding the ballot counting and processing from our Republican poll observers," Deputy Campaign Manager Justin Clark said in a statement to the Associated Press on Wednesday.

No additional ballot counting should have taken place in Pennsylvania "until there is meaningful transparency and Republicans can ensure all counting is done above board and by the law," the campaign added.

The mail-in vote count in Philly was temporarily halted around noon on Thursday to resolve the GOP's challenge over greater access to observation at the convention center. The city appealed the decision with the Pennsylvania Supreme Court and quickly resumed the count.

In Allegheny County, 29,000 ballots cannot be counted until Friday, as a result of an agreement reached by all parties related to another legal challenge. These votes will be set aside until the state's Nov. 6 deadline on Friday for mail-in votes.

As of 9 p.m. Thursday, Trump narrowly led Biden in Pennsylvania. Trump had gained 49.74% of the votes to Biden's 49.11% with about 90% of the expected vote counted, according to the Associated Press.

At one point, Trump's lead had exceeded 600,000 votes. But as more mail-in ballots are counted, the race has become much closer. State officials expect results to be finalized within the next several days.

Despite the race being too close to call, the Trump campaign already has declared victory in Pennsylvania — and the president has “claimed” the commonwealth.

Trump’s statements came after he falsely claimed victory while addressing supporters at the White House around 2:15 a.m. on Wednesday morning, citing large leads in several battleground states, including Pennsylvania.

Trump campaign officials told reporters on Thursday that they "still have confidence in Pennsylvania" and are expecting to defeat Biden by more than 200,000 votes.

In order to maintain control of the White House, Trump must win the five remaining states that have not been declared by the Associated Press. Biden currently leads Trump in electoral votes, 264 to 214.

Biden has several paths to 270 electoral votes and does not need to win Pennsylvania.