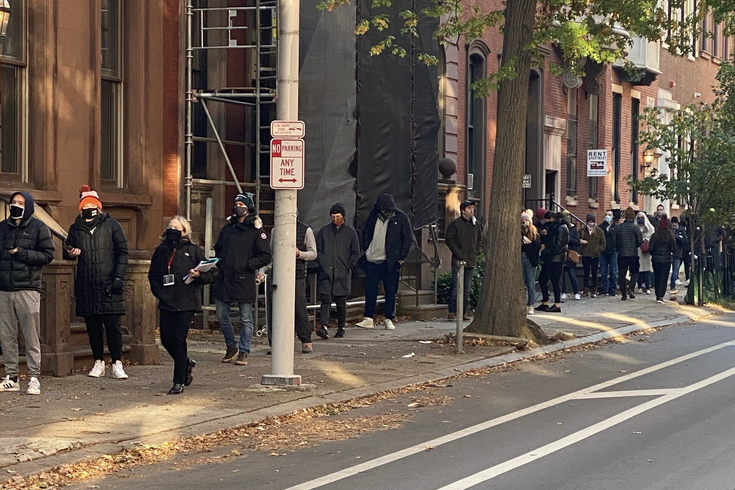 The line of voters outside a polling place in Philadelphia's Rittenhouse neighborhood on Tuesday morning stretches most of the block. Among the races on ballots in the region were six U.S. House elections.

Republican Rep. Brian Fitzpatrick outlasted Democratic challenger Christina Finello in the 1st Congressional District – the only local race expected to be somewhat competitive. The 1st District represents all of Bucks County and a small part of Montgomery County.

Here are details of the remaining five U.S. House elections where incumbents have won re-election to Congress.

The Associated Press called the race after the Democratic incumbent captured over 89% of the vote, defeating GOP challenger David Torres. Election results are considered unofficial until certified by state election officials.

Boyle was first elected to Congress in 2014 and previously represented the 13th Congressional District for four years.

Before heading to Washington, D.C., Boyle served in the Pennsylvania House of Representatives from 2009-2015.

Torres, who has served as the GOP ward leader for Philly’s 19th ward, earned the right to face Boyle after running unopposed in the Republican primary this past June.

This is not the first time that Boyle and Torres faced off, as Boyle defeated Torres by 58 percentage points in 2018.

The Associated Press called the race for Evans at 8:40 p.m. Tuesday. Election results are considered unofficial until certified by state election officials.

Evans was first elected to the 2nd Congressional District in 2016 when he defeated incumbent Chaka Fattah in the Democratic primary and won a special election later that year after Fattah was forced to resign from Congress over corruption charges.

Before heading to Washington, the incumbent Evans served in the Pennsylvania House of Representatives for 35 years from 1981-2016.

Harvey ran unopposed in this past June’s Republican primary. He ran to represent District 190 in Pennsylvania’s House of Representatives in 2019, but he garnered less than 3% of the vote.

The Associated Press called the race at 11:52 p.m. Tuesday. Election results are considered unofficial until certified by state election officials.

Dean will be opposed in this November’s election by GOP challenger Kathy Barnette, who ran unopposed in the Republican primary this past June.

Barnette served in the Armed Forces Reserves for 10 years and has worked in corporate finance. She also is a political commentator.

Pruett grew up in Moscow and moved to the U.S. at the age of 10 in 1980. She has a background in running a family-owned event photography and video studio business, retail sales and management.

Rep. Chrissy Houlahan has earned a second congressional term representing the vast majority of Chester County and a small portion of Berks County.

The Associated Press called the race for Houlahan on Wednesday afternoon. The incumbent Democrat had earned 53% of the vote with 81% of precincts having reported. Election results are considered unofficial until certified by state election officials.

Houlahan, who was first elected to the U.S. House of Representatives in 2018, has a background in engineering and entrepreneurship. She also served in the military as an officer in the U.S. Air Force.

The incumbent Houlahan was opposed by Republican challenger John Emmons, who ran unopposed in the Republican primary in June.

Emmons’ professional background is in business. He has worked as a chemical engineer, manager and operations director.