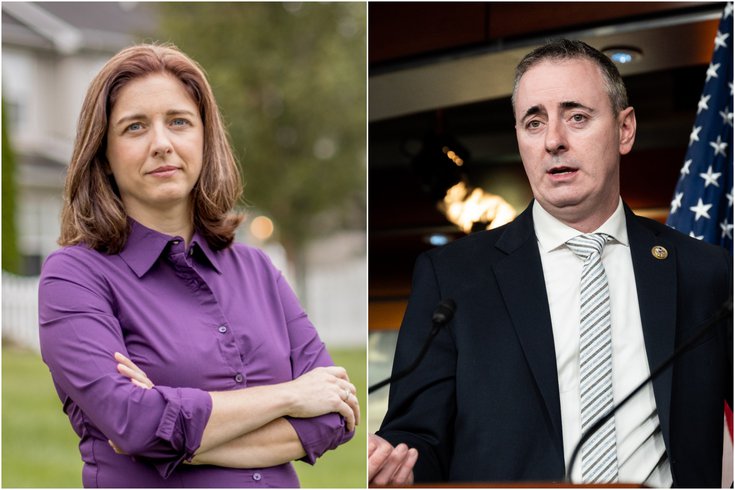 In one of Pennsylvania's most closely watched Congressional races, Republican Brian Fitzpatrick has retained his 1st District seat, defeating a Democratic challenge from Christina Finello.

The Associated Press declared Fitzpatrick the winner on Wednesday afternoon, giving Fitzpatrick 60.3% of the vote against Finello's 39.47% with 78.55% of precincts reporting. The district covers all of Bucks County and a portion of Montgomery County

Fitzpatrick, a former FBI supervisory special agent and federal prosecutor, was first elected in 2016. He held onto his seat in 2018 after the Pennsylvania Supreme Court ordered all of the state's districts to be redrawn.

2020 Pennsylvania U.S. House races: No surprises expected in most of the congressional elections

Fitzpatrick has focused much of his time in office on border security, government reform and the opioid epidemic. He campaigned on promises of national security, economic opportunity and building political consensus around issues such as education, government reform, health care, and immigration.

Though Fitzpatrick has generally been a moderate and bipartisan lawmaker in the U.S. House, he had leaned closer to President Donald Trump during the run-up to the 2020 election. Fitzpatrick has often framed the coronavirus pandemic as China's responsibility, positioning his campaign messaging in ways that speak more directly to the president's base.

In terms of COVID-19-related legislation, however, Fitzpatrick has partnered with Democratic colleagues on measures to extend federal contributions to children's health insurance and allow workers to unionize electronically during the pandemic.

Finello, a clinical psychologist, had targeted some of Fitzpatrick's positions on COVID-19 relief, highlighting his opposition to oversight of pandemic relief that would ensure struggling small businesses received help over large corporations.

Finello pointed to similar "no" votes on issues such as extending emergency unemployment insurance, extending the moratorium on evictions and foreclosures, and providing federal assistance to state and local governments to keep front line workers employed.

Before running for office, Finello worked for the Philadelphia Department of Behavioral Health and Intellectual Disability Services. She also formerly served as deputy director of Housing and Human Services for Bucks County.

At her campaign website, Finello promised to lower the cost of insurance and prescription drugs, decrease the burden of student debt, and provide real retirement security for seniors. She also advocated for the expansion of health care access for veterans and the prioritization of mental health and substance abuse treatment in the communities she served in the 1st District.

Finello's campaign further called into question Fitzpatrick's pro-life stance, noting that her opponent voted in support of the Born-Alive Abortion Survivors Protection Act, which is seen by some as a wedge issue Republicans have pushed to renew debate about broader reproductive rights.

2020 Election Results: Pennsylvania races for Attorney general, auditor general and treasurer all up for grabs

Polls in recent weeks showed Finello gaining ground on what had appeared to be a comfortable lead for Fitzpatrick in the months following the July primary, which initially gave the appearance of a dead heat between the two candidates.

The race attracted significant money for both parties, with Fitzpatrick's campaign raising $3.4 million compared to just over $1.4 million for Finello, according to filings with the Federal Election Commission.