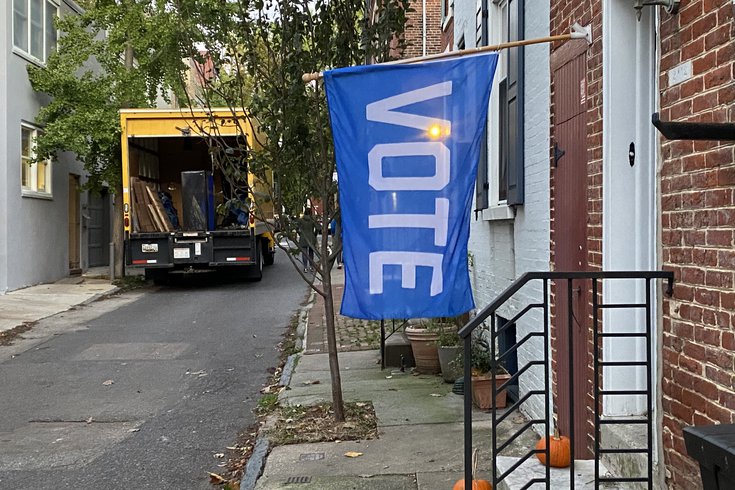 On Election Day, Tuesday, Nov. 3, 2020, voters will decide on three statewide executive offices: attorney general, auditor general and treasurer. Above, a "Vote" flag hangs outside a home in Philadelphia.

The races for state attorney general, auditor general and treasurer all have important implications for Pennsylvania residents as the state continues to navigate the COVID-19 pandemic and other prominent matters of public interest.

Democrat Josh Shapiro seeks his second term as Pennsylvania Attorney General running against Republican Heather Heidelbaugh. He was elected in 2016, following from stints in the Pennsylvania House of Representatives and chair of the Montgomery County Board of Commissioners.

During his first term, Shapiro focused on issues ranging from the opioid epidemic and student loans to gun violence, drug trafficking, fracking violations, and sexual abuse in the clergy. Since the start of the COVID-19 crisis, Shapiro has targeted consumer price gouging and vowed to protect workers' rights.

Shapiro also recently took the lead on a multistate lawsuit challenging operational changes at the U.S. Postal Service, including limits on staff overtime and delays in timely mail delivery. He's been a vocal opponent to President Donald Trump's border policies and has lately turned his attention to defending civil rights amid calls for police reform.

At his website, Shapiro outlines his plans to continue fighting for environmental justice in Pennsylvania and ensuring the rights of LGBTQ residents, should he be elected to a second term.

Heidelbaugh is a trial lawyer who formerly served as a member of the Allegheny County Council.

At her campaign website, Heidelbaugh has characterized Shapiro as a "cookie cutter politician from central casting," arguing that Pennsylvania needs a full-time lawyer who can bring vigorous litigation to the state's central issues.

Heidelbaugh has framed her run for attorney general around the opioid epidemic, targeting special interest groups, protecting consumers, and rooting out corruption, waste and fraud in state government.

"The attorney general should be vigorously pursuing these problems, not showboating around the state while setting up a run for higher office in two years," Heidelbaugh wrote on her website. "As never before, Pennsylvania needs an attorney general who sees the office as a destination, not a stepping-stone."

Also running for attorney general are Green Party candidate Richard Weiss, who advocates for broad criminal justice reform, and Libertarian Party candidate Daniel Wassmer, a professor and attorney whose focus is on marijuana decriminalization and stronger pursuit of antitrust laws.

The Pennsylvania Auditor general serves as the state's fiscal watchdog, detailing the effectiveness and weak points of government finance.

The winner of the race will replace two-term Auditor General Eugene DePasquale, who is running for a seat in the U.S. House of Representatives. DePasquale's office focused on issues such as state Medicaid waste and the fiscal health of Pennsylvania's school districts and volunteer fire departments.

In 2020, Democratic candidate Nina Ahmad will look to build on her experience as Philadelphia's deputy mayor under Jim Kenney. She previously ran for Lt. Governor in 2018, losing to John Fetterman.

Ahmad, an entrepreneur and molecular biologist, has campaigned on issues such as protecting Pennsylvania's minority communities, ensuring employment opportunities in the wake of the COVID-19 crisis and advocating for strong health care in the state.

In Philadelphia, Ahmad launched the city’s Commission for Women, fought for pay equity, and worked to end workplace harassment.

If elected, Ahmad would become the first woman of color to serve as a statewide executive in Pennsylvania.

During his first term in Dauphin County, DeFoor helped save and recover $1 million in taxpayer dollars and created the county's first audit division, according to his campaign website. He also created Dauphin County's first Retirement Fund Report.

DeFoor has advocated for fiscal transparency in public contracts and has vowed to cut wasteful government spending. His campaign touts his mission to protect taxpayers and strengthen the state's economy by enabling businesses to create new jobs.

Pennsylvania's state treasurer is the chief financial officer of the government, managing the state's money and serving as its banker.

In Pennsylvania, that responsibility includes approximately $26 billion in investments, such as savings accounts for people with disabilities, colleges, local governments and non-profits, as well as $3.5 billion in unclaimed property.

The treasurer also impacts the management of $92 billion in state pensions for retiring teachers and other public servants.

In 2020, Democrat Joe Torsella is running for a second term on promises of transparency and integrity for Pennsylvania residents. He has vowed to lift the fortunes of low and middle-income Pennsylvanians and deliver results for taxpayers.

Torsella previously served as a U.S. Ambassador to the United Nations for Management and Reform. He also was the founding president and CEO of the National Constitution Center in Philadelphia and served as the city's Deputy Mayor for Policy and Planning under Ed Rendell.

During his first term as treasurer, Torsella divested from and sued Wall Street firms, opposed the influence of private equity in state pension funds, and supported shareholders taking action against tech giants, including Facebook.

In his second term, Torsella aims to establish automatic college or vocational training savings accounts for every child born in Pennsylvania. He also hopes to create portable, individual retirement accounts for the 2 million private sector workers in Pennsylvania who don't have access to workplace retirement plans.

Running against Torsella is Republican and Iraq War veteran Stacey Garrity, who previously ran unsuccessfully for Congress in 2019.

Garrity served three deployments from 1991 to 2008 and worked as a cost accountant at Global Tungsten & Powders Corp., an international supplier of refractory powders, while in the U.S. Army Reserve.

In August, Garrity lead the Pledge of Allegiance at a rally for President Donald Trump in Old Forge, Pennsylvania. In mid-October, Garrity announced she had tested positive for COVID-19 after attending various political events without wearing a face mask.

Garrity has criticized Torsella for having ambitions to run for higher office, arguing that Pennsylvania deserves a treasurer who will complete a full term.