2020 Pennsylvania Election Results: Here are the races to keep watching

Rep. Brian Fitzpatrick leads Christina Finello in the U.S. House's 1st District, but a winner has not yet been declared 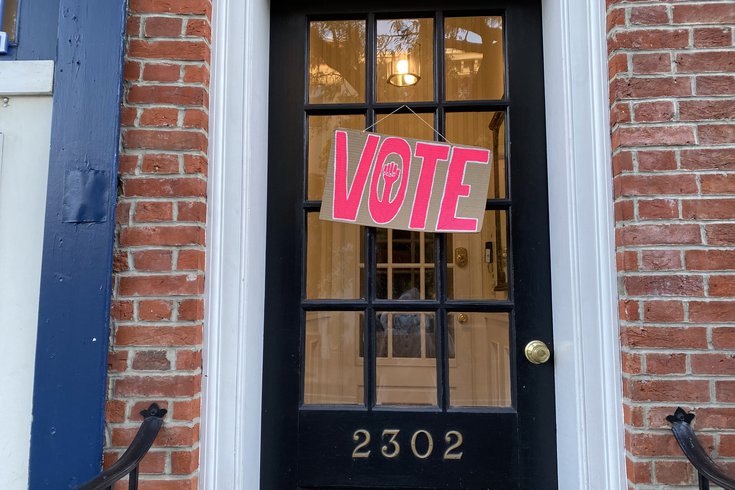 A sing encouraging neighbors to vote hangs on the door of a home in Philadelphia on Monday, Nov. 2, 2020. This article contains a round of the elections in the Philadelphia region that PhillyVoice is covering along with link to additional coverage.

Here's a rundown of all the Pennsylvania elections that PhillyVoice is following on election night and links to where you can find more coverage – aside from the presidential race between President Donald Trump and former Vice President Joe Biden. That coverage can be found here.

Check back often as this article will be updated frequently as Pennsylvania's 2020 election results come in throughout the night and in the coming days.

Republican incumbent Brian Fitzpatrick is running against Democrat Christina Finello. This will be one of Pennsylvania's most closely watched races on Tuesday. The 1st congressional district covers all of Bucks County and a portion of Montgomery County. Fitzpatrick, a former FBI supervisory special agent and federal prosecutor, was first elected in 2016. He held onto his seat in 2018 after the Pennsylvania Supreme Court ordered all of the state's districts to be redrawn.

Though Fitzpatrick has generally been a moderate and bipartisan lawmaker in the U.S. House, he has leaned closer to President Donald Trump during the run-up to the 2020 election. Fitzpatrick has often framed the coronavirus pandemic as China's responsibility, positioning his campaign messaging in ways that speak more directly to the president's base.

Finello, a clinical psychologist, has targeted Fitzpatrick's voting record during the COVID-19 crisis to highlight his position against oversight of pandemic relief to ensure that struggling small businesses received help over large corporations. Finello pointed to similar "no" votes on issues such as extending emergency unemployment insurance, extending the moratorium on evictions and foreclosures, and providing federal assistance to state and local governments to keep front line workers employed.

Democratic Rep. Brendan Boyle seeks a fourth term representing all of Northeast Philly and parts of North Philly east of Broad Street. Boyle was first elected to Congress in 2014 and previously represented the 13th Congressional District for four years. Before heading to Washington, D.C., Boyle served in the Pennsylvania House of Representatives from 2009-2015.

Republican David Torres, is the GOP leader for Philly’s 19th Ward. He ran unopposed in the Republican primary in June, and he previously ran against Boyle in 2018, an election Boyle won comfortably.

Democratic Rep. Dwight Evans is seeking a third term on representing Center City, West Philly, and Northwest Philly on Election Day. Evans was first elected to the 2nd Congressional District in 2016. Prior to that he served in the Pennsylvania House of Representatives for 35 years from 1981-2016.

Republican Michael Harvey ran for election in Pennsylvania House of Representative's 190th District last year and received less than 3% of the vote.

GOP challenger Kathy Barnette served in the Armed Forces Reserves for 10 years and has worked in corporate finance. She also is a political commentator.

Mary Gay Scanlon is running for her second term in the district representing all of Delaware County, South and Southwest Philly, and a small part of Chester County in Washington, D.C. Scanlon had represented the 7th District before congressional lines were redrawn and her district was renumbered the 5th District. Scanlon worked as an attorney before turning her career to politics.

Her opponent on Tuesday is Republican Dasha Pruett. Pruett grew up in Moscow, Russia, and moved to the U.S. at the age of 10 in 1980. She has a background in running a family-owned event photography and video studio business, retail sales, and management.

Rep. Chrissy Houlahan seeks a second term representing the vast majority of Chester County and a small portion of Berks County. Houlahan, a Democrat, was first elected to the U.S. House in 2018 and has a background in engineering and entrepreneurship. She also served in the military as an officer in the U.S. Air Force.

Republican John Emmons ran unopposed in his party's primary in June. Emmons’ professional background is in business, in which he has worked as a chemical engineer, manager, and operations director.

Josh Shapiro seeks his second term as Pennsylvania Attorney General running against Republican Heather Heidelbaugh. He was elected in 2016, following from stints in the Pennsylvania House of Representatives and chair of the Montgomery County Board of Commissioners. During his first term, Shapiro focused on issues ranging from the opioid epidemic and student loans to gun violence, drug trafficking, fracking violations, and sexual abuse in the clergy. Since the start of the COVID-19 crisis, Shapiro has targeted consumer price gouging and vowed to protect workers' rights.

Heidelbaugh is a trial lawyer who formerly served as a member of the Allegheny County Council. She called Shapiro as a "cookie cutter politician from central casting," arguing that Pennsylvania needs a full-time lawyer who can bring vigorous litigation to the state's central issues. Heidelbaugh has framed her run for attorney general around the opioid epidemic, targeting special interest groups, protecting consumers, and rooting out corruption, waste and fraud in state government.

Read more and get the latest results here.

With two-term Auditor General Eugene DePasquale running for the U.S. House of Representatives there will be a newcomer to this seat. Democratic candidate Nina Ahmad worked as a deputy mayor in Philadelphia in Jim Kenney's administration, and she previously ran for Lt. Governor in 2018, losing to John Fetterman. Ahmad, an entrepreneur and molecular biologist, has campaigned on issues such as protecting Pennsylvania's minority communities, ensuring employment opportunities in the wake of the COVID-19 crisis and advocating for strong health care in the state.

Republican candidate Tim DeFoor, a Harrisburg native, currently is the Dauphin County controller and previously worked as a state fraud investigator in Pennsylvania's Inspector General's Office. During his first term in Dauphin County, DeFoor helped save and recover $1 million in taxpayer dollars and created the county's first audit division, according to his campaign website. He also created Dauphin County's first Retirement Fund Report.

Democrat Joe Torsella is running for a second term on promises of transparency and integrity for Pennsylvania residents. He has vowed to lift the fortunes of low and middle-income Pennsylvanians and deliver results for taxpayers. He also was the founding president and CEO of the National Constitution Center in Philadelphia and served as the city's Deputy Mayor for Policy and Planning under Ed Rendell. During his first term as treasurer, Torsella divested from and sued Wall Street firms, opposed the influence of private equity in state pension funds, and supported shareholders taking action against tech giants, including Facebook.

Republican Stacey Garrity served three deployments during the Iraq War from 1991 to 2008 and worked as a cost accountant at Global Tungsten & Powders Corp., an international supplier of refractory powders, while in the U.S. Army Reserve. She is pledging to eliminate waste and hidden fees from private money managers in Pennsylvania's two largest taxpayer funded pension systems. She has also called for greater fiscal transparency and expanding tuition assistance programs for Pennsylvania college students.