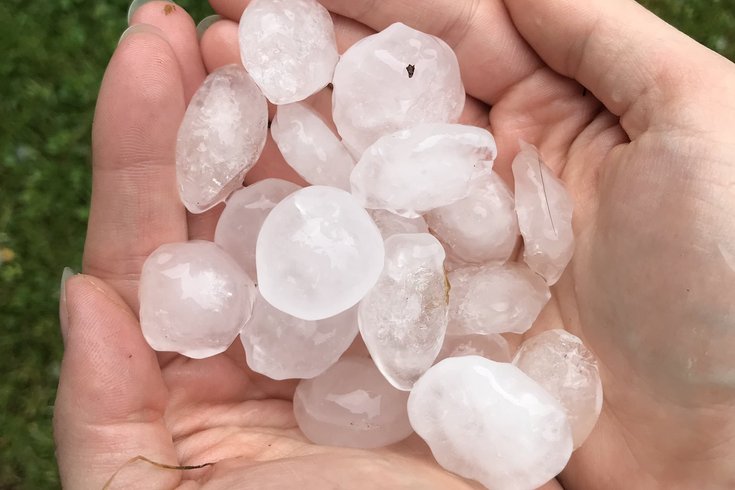 Hail, pictured here, fell all over the Philadelphia and Lehigh Valley region on Tuesday as a number of severe storms swept across Pennsylvania.

Severe weather in the Philadelphia region is predicted to persist through Wednesday, a day after parts of eastern Pennsylvania were pelted with large hail, heavy thunderstorms, and rainfall.

The National Weather Service in Mount Holly, New Jersey issued a flash flood watch for Philadelphia and the surrounding Pennsylvania counties and for most of South Jersey from 4 p.m. until later Wednesday night due to the possibility of strong-to-severe thunderstorms and rainfall.

Total rain amounts are predicted to total two inches, with higher rainfall totals possible locally. Flash flooding could also cause poor drainage flooding, according to NWS, as well as rises in area rovers and streams.

The NWS flood watch is in place for eastern Pennsylvania, most of New Jersey, and northern Delaware.

Tuesday's storms produced quarter-sized to golf-ball-sized hail in some parts of southeastern Pennsylvania including in Lancaster County, Berks County, and Schuylkill County. The NWS confirmed a tornado touched down in Morgantown in Berks County, based on video of the storm.

On Thursday, afternoon rain and thunderstorms are again likely, according to the National Weather Service forecast.